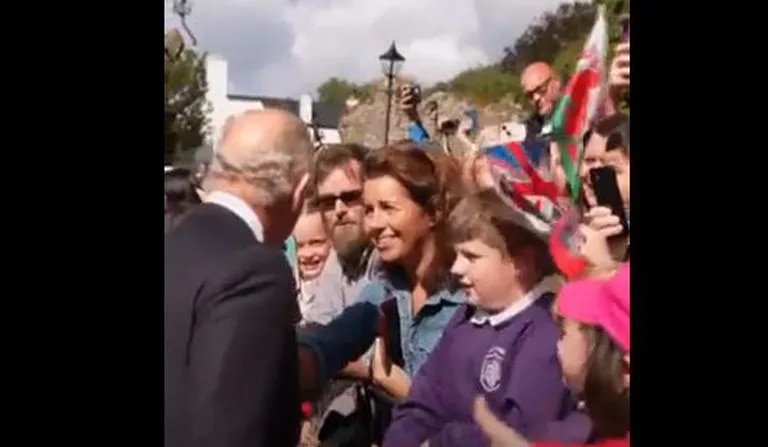 The King Charles iii They finished their first tour of England today Visit Wales, Where They were greeted with applause and cheers. During your stay, The brand new king played an embarrassing episode this afternoon with A man who reprimanded him for the cost of the crown, A group of people had gathered while saluting Close to Cardiff Castle.

England’s King Charles III arrived in Cardiff this Friday, representing his first official visit to Wales since ascending to the throne. The reception for the new king was ambivalent: hundreds of fans greeted him with Welsh flags, chanting “King, hip for the King!” and “God Save the King!”

Nearby, however, a handful of anti-monarchy protesters booed the royal family and displayed banners reading “Abolish the monarchy”, “Citizen not subject” and “Democracy now”.

Leaving Cardiff Castle, the king approached a group to greet him, but was sharply questioned by one who criticized the high costs of the crown and royal ceremonies after Isabel II’s death, paid for with taxpayers’ money.

“While we struggle to heat our homes, we have to pay for their parade. The taxpayer pays for you, for what?”, the man scolded the king, who quickly cut himself off and continued to greet the crowd.

The pictures of the tense moment quickly went viral on social networks, where many users expressed their opinion about it.

The death of the Queen, who had been a symbol of unity for seven decades, boosted independence sentiment in Wales and Scotland and Northern Ireland, which is why Charles III’s tour is considered so important.

Meanwhile, in London, thousands of people continued to march through Elizabeth II’s funeral chapel, which has been set up since Wednesday at Westminster Hall, the oldest chamber of the British Parliament.

Authorities were forced to “at least” prevent people from joining the 14-hour queue across the Thames for an extra six hours.

They ceremoniously ascended three of the four red steps on which the coffin was placed and stood on its four sides with their backs to the coffin. They remained there for 12 minutes, before the watchful gaze of the British marched in front of the Queen’s remains.

Then they left the room with the same dignity. Known as the “Rising of the Princes,” the tradition dates back to 1936, when George V’s four sons stood guard unannounced around his coffin.

Carlos III and his brothers had already seen the coffin on Monday in Scotland, where the monarch died at the age of 96 on September 8 at his summer home in Balmoral.