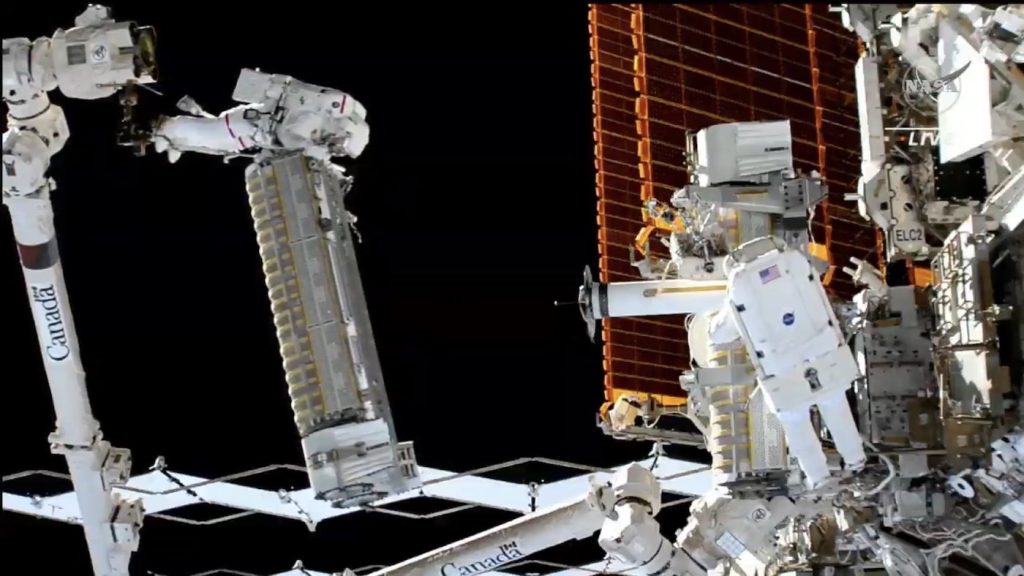 NASA astronauts Josh Casada and Frank Rubio headed outside the International Space Station Saturday for a seven-hour journey through space to install and launch a recently introduced new solar array aboard a SpaceX cargo ship.

Casada and Rubio, both on their first spacewalks, began the spacewalk at 7:16 a.m. EDT (1216 GMT) Saturday. The start of the flight was officially marked when the astronauts switched their spacesuits to battery power.

Astronauts moved from Quest in the space station’s airlock to the starboard, or right-hand side of the laboratory’s solar truss, where the station’s robotic arm placed two new ISS Roll-Out Solar Array, or iROSA, modules earlier this week after extracting them from it. . The trunk of the SpaceX Dragon cargo capsule. The Dragon spacecraft delivered the solar arrays to the space station on November 27, along with several tons of supplies and experiments.

The new solar array blankets were wrapped around pulleys and rolled up like a yoga mat once affixed to a mounting bracket on the right-hand section 4 or S4 of the space station’s electrical truss, which measures more than the length of a football field from end-to-end.

The astronauts first worked to remove one of the two newly delivered iROSA modules from its mount by releasing bolts and release restraints. Cassada took a foothold position at the end of the Canadian robotic arm, and manually held the solar array rollers while the arm moved him to the S4 truss.

The two space pilots placed the iROSA module on a pre-positioned mounting bracket during a previous spacewalk. They slotted the iROSA unit onto its hinge, then installed screws to hold it in place. Casada and Rubio electrical connectors to connect the new iROSA module to the space station’s electrical system. Then they laid a Y cable to route the power generated by both the new solar array and the original S4 solar panel back to the lab’s power grid.

A stabilization bracket connects the new arrays to the station’s power channels and rotating joints, which keep the solar wings pointed toward the sun while the spacecraft races around Earth at more than 17,000 miles per hour.

The International Space Station has eight power channels, each of which is fed by electrical energy generated from a single solar array wing that extends from the station’s backbone. The new solar array, which was deployed on Saturday, will produce electricity for the space station’s 3A power channel.

When all six iROSA modules are deployed to the station, the power system will be able to generate 215 kilowatts of electricity to support at least another decade of science operations. The booster will also accommodate the new commercial modules planned for launch on the space station.

The first pair of new solar arrays rolled out to the space station last year were installed on the station’s oldest original solar panel array in the P6 truss section, located at the far left end of the forward center power strut. Two more iROSA modules are scheduled to launch on SpaceX’s resupply mission next year.

The new solar arrays were provided to NASA by Boeing, Red Wire and a team of subcontractors.

Once the new iROSA module was mechanically and electrically integrated into the station’s S4 gears, the astronauts released clips to keep the solar array wrapped in the launch configuration. This allowed the blankets to expand gradually using the stress energy of the composite booms supporting the solar blanket. The deployment mechanism design eliminates the need for motors to drive the solar array.

“It’s getting moving,” a radio mission control pilot chimed in, prompting applause among the support staff in Houston.

The carbon fiber support arms have been moved back against their natural shape for storage during launch.

The solar array took about 10 minutes to propagate to its fully extended configuration, spanning 63 feet long and 20 feet wide (19 by 6 meters). That’s about half the length and half the width of the station’s current solar arrays. Despite their small size, each of the new arrays generates roughly the same amount of electricity as each of the station’s existing solar panels.

Once the blanket was opened, the astronauts adjusted tension screws to secure the iROSA blanket in place.

The astronauts then went back inside on the space station’s truss to set up another iROSA module, which will be installed on the left side of the P4 truss section for a spacewalk tentatively scheduled for Dec. 19.

With their tasks complete, Cassada and Rubio return to the Quest airlock and seal the hatch. They began repressurizing the air chamber at 2:21 p.m. EDT (1921 GMT), completing the spacewalk, which lasted 7 hours and 5 minutes.

Saturday’s spacewalk was the second for Casada and Rubio’s career, and the 256th spacewalk since 1998 to support assembly and maintenance of the International Space Station.