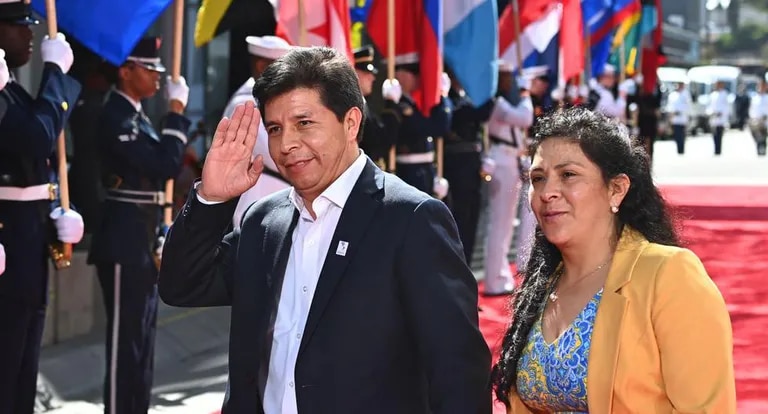 in the middle of a CorruptionPresident of Peru Peter’s CastleHis wife, First Lady Lilia Paredes, confirmed this Friday that she is ready to surrender her passport. If the judge prevents him from leaving the country. This is how he tried to prevent the versions of A It is said to be an escape attempt In the midst of a judicial inquiry that rocked his administration.

Sister-in-law of the President and sister of his wife, Jennifer ParedesTemporarily detained He was allegedly involved in a corruption and money laundering network. The president faces five tax probes along with his wife. Into this framework, came the Judiciary Attack on Government Palace Looking for evidence.

Faced with the possibility of the investigation intensifying and strong accusations from opponents, Castillo confronted the rumors during an action in Lima. “Today Of course you want to mount some interrupt request My wife is leaving the country. I have to tell you that in the next few hours she is ready to hand over her own passport to prove it. She is not going to leave the country anytime soon, not only to submit to justice, but to prove her innocence.“He revealed.

President Castillo’s wife has yet to have an open trial, but anti-corruption prosecutors believe she will be one of the accused members. A criminal organization dedicated to awarding public service concessions to private companies in exchange for bribes.

“From the investigation and proceedings conducted, the existence of a criminal organization dedicated to the commission of various criminal methods has been indicated”affirmed the decision of the High Court Judge of the Special Criminal Division, Raul Justino RomeroHe authorized the search and arrest of his sister-in-law.

A few days ago, an unprecedented move was made at the government palace in Peruvian history. Justice has never entered the headquarters of the executive to arrest a person.

According to the ongoing investigation and the complaints filed, the first lady’s sister Yennefer Paredes, businessmen and other former government officials are involved in the scheme. Castillo, however, denounced a new “attack” from the judicial system against him and his family.

Opposition sectors have strongly questioned Castillo’s administration and expressed doubts about his mandate, going so far as to accuse him of “moral incapacity” to hold office. It’s an ambiguous figure, long questioned by the country’s most expert jurists, yet it remains enshrined in Peru’s constitution.

Castillo, rural teacher and trade unionist, He has already defeated two parliamentary attempts to remove him from office. Since his inauguration in 2001, opposition sectors have accused him of corrupt practices and “treason against the fatherland”.

The president, who felt he was facing “accusations of conspiracy” from opposition forces, confirmed that there was no evidence of corruption against him more than a year into his administration.

Also First Lady Lilia Paredes He appeared before a parliamentary inquiry committee last month. However, the wife of the president refused to answer the lawmakers on the recommendation of her lawyer. The woman had already reported before the public ministry for the same case.

Peru’s prosecutor’s office requested that Yennefer Paredes be detained for 36 months. The brother-in-law of the country’s president, Pedro Castillo, was accused of money laundering “and other grievances” against the state.” The 26-year-old Paredes was raised “like a daughter” by the current presidential couple, whom she considers almost like her parents.

In this sense, the judge has announced via Twitter that the Department of Justice will hold a detention hearing on Sunday against Yennefer Paredes and the mayor of Anguia, Jose Medina Guerrero.

At this point, Paredes comes across a cross Detention order for ten days. After the announcement that he would be imprisoned for the next three years, the accused reiterated his willingness to cooperate with justice, newspaper ‘El Comercio’ reported.

“In my defense, I’ve known this case from the beginning, I’ve been cooperating with the justice system, I’ve been to the prosecutor’s office, I’ve been to Congress, and I’m always ready to give my statements,” he promised. Almost before the Appeals Chamber.

The President’s sister-in-law has questioned the functioning of the Judiciary and has mentioned this In ten days “only” they quoted her four times to declare. “The rest of the time I was here, nothing was done as the lawyer suggested. Anyway, I am always ready to cooperate,” he said.

With information from Télam and DPA