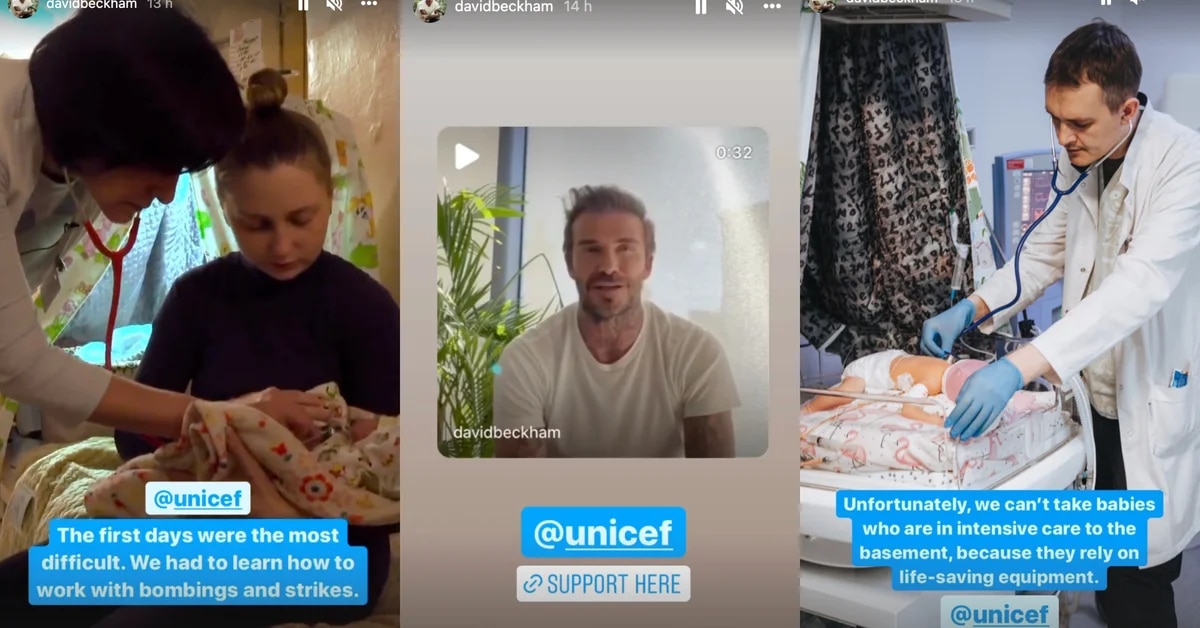 The first days were very difficult. The doctor said we need to learn how to work under bombings and attacks.

David Beckham handed over control of his Instagram account to a Ukrainian doctor working in Kharkiv on Sunday. The gesture of the former British world football star is that his more than 70 million followers on the social network are witnessing the barbarism created by the Russian invasion of Ukraine.

Videos and photos have been posted on the Instagram accounts of former Manchester United and Real Madrid players. Irina, a pediatric anesthesiologist and head of the Regional Perinatal CenterDuring a day’s work in the middle of the Russian siege.

“The first few days were very difficult. We had to learn how to work under bombings and attacks, ”the doctor said.

“Unfortunately, children in intensive care cannot be taken to the basement because they are dependent on life-saving equipment.”

In published stories, The Ukrainian doctor showed a narrow base, through which all pregnant women and mothers with newborns were expelled on the first day of the Russian invasion.. Photographs were also released showing the presence of newborn wards in oxygen generators provided by UNICEF. Also a video of a mother who was born with respiratory problems and her house was demolished with her baby.

Irina said they work tirelessly, relentlessly. “We probably risk our lives, but we never think about it. We love our job … The doctors and nurses here are worried and crying, but none of us will give up,” he said.

“The doctors and nurses here are worried and crying, but we have not given up,” he added.

Beckham has invited millions of his followers to donate to charities working in Ukraine to guarantee access to food, water and medicine in Ukraine.And to help all civilian victims.

“Thanks to your donations, the oxygen generators you receive help newborns survive in dire circumstances,” he said.

Meanwhile, the humanitarian situation continues to deteriorate. “The war in Ukraine is so devastating that 10 million people have fled as internally displaced persons or refugees abroad.UNHCR President Filippo Grande said Sunday.

“This is Yana and her baby Michael. He was born on the second day of the war with respiratory problems. He is fine now. But his family’s house was destroyed and now he can not go back.”

The humanitarian situation in Mariupol is as dramatic as in other besieged cities.

Some families said the bodies had been lying in the streets for days They were hungry and thirsty on the bitter cold nights in the cellars below zero.

The shelling also severely damaged the Azovstal steel and metallurgical plant in the industrial city of Mariupol, an important port for steel exports from the east of the country.

The support of Unicef ​​is very important to us

In the north of the country, the mayor of Chernikov, Vladislav Atroshenko, described the situation in his city as a “complete humanitarian catastrophe.”

“Indiscriminate artillery fire continues in residential areas, killing dozens of civilians, children and women“There is no electricity, no heat, no water. The city’s infrastructure is completely destroyed,” he said on television.

According to official Ukrainian figures, the attacks have not stopped in recent days in the capital, Kyiv, Mikholev, and in Kharkov, a major Russophone city in the northwest.

“Oxygen generators we receive from UNICEF help provide oxygen to the children in the basement.”

According to the UK Ministry of Defense Russia has “failed to gain control of the airspace and has relied heavily on range weapons launched from Russia’s comparative defenses to attack targets in Ukraine.”

According to the Ukrainian military, Russian troops have carried out 291 missile strikes and 1,403 airstrikes since the start of the invasion on February 24.

“UNICEF has been distributing equipment throughout Ukraine for many years and has excellent equipment to supply equipment to maternity hospitals.”

In the intervention published in Russian from Saturday to Sunday night, The bodies of Russian soldiers are scattered on the battlefields and have not been collected, Zhelensky said..

“I would like to ask the citizens of Russia, what did you do to them for so many years that they did not realize their losses?” He added that, according to him, more than 14,000 Russian soldiers have died since the beginning. Invasion. Russia says 500 people have died.

“The doctors and nurses here are worried and crying, but we’re not letting up.”