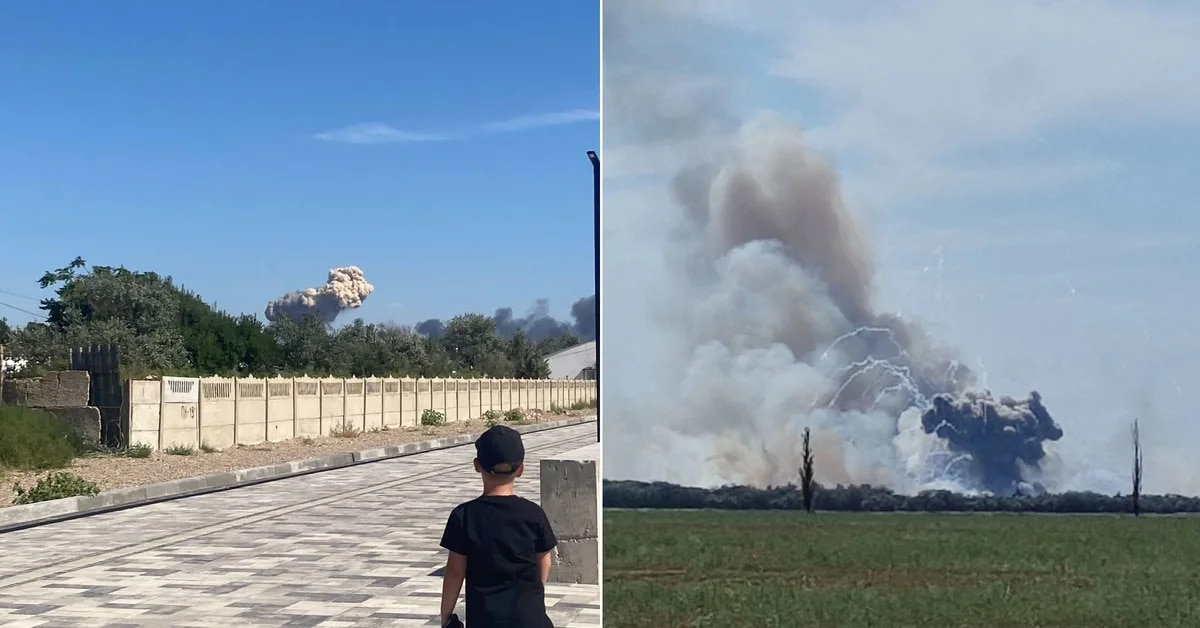 Thick smoke rises from the bottom of Novofedorivka

Several loud explosions And they are close to A. this Tuesday A Russian military airbase in Novofedorivka, western Crimea, as well as a thick column of black smoke. The Russian Ministry of Defense said Explosive ammunition and, though he at first denied that there were any injuries, Local governor Sergey Aksyonov confirmed that at least one person had been killed and five others wounded.

Pictures shared on social media showed a plume of smoke in the area and the moment A huge explosion caused tall flames over a long distance.

Within a minute, at least 12 explosions of varying intensity were heard, According to two witnesses consulted Reuters. Three of them were particularly strong and caused fire and smoke.

In a statement, officials indicated that the aircraft equipment was not damaged. The New York Times published a report attributed to a high-ranking Ukrainian official in which he asserted that this was a planned attack by forces from Kyiv. Moscow says it was an accident in principle.

Smoke near a Russian military base in Crimea (@OAlexanderDK)
(via Reuters)

Governor Aksyonov, as a first step, A A five kilometer radius to minimize potential risks to local residents. At least 30 people were evacuated.

Earlier, local officials noted the events. “For now, I can only confirm that there are several explosions in the Novofedorovka region. I ask you to wait for official reports,” Oleg Kryuchkov, an adviser to the local government, said in a telegram.

Viktoria Kasmirova, a member of the Sakhi district government (where is the bay), says the place is bursting at the seams. All the windows in the place were shattered by the shock waves.

in detail Toss, the airport is used as a Ministry of Defense airbase for aircraft and helicopters, including naval aviation. Also, there is a test training complex to practice take-off and landing of naval aircraft.

The Sagi base has allowed Russian warplanes stationed there to strike parts of southern Ukraine at short notice.

(Reuters)
Smoke can be seen from houses near the base (Reuters)

Russia leased the naval port of Sevastopol, home of its Black Sea fleet, to Kiev for decades, but annexed the entire Ukrainian peninsula in 2014 after organizing a referendum. The majority of the international community did not recognize the results of that referendum.

The peninsula, which is controlled by Russia and is a popular tourist destination, has been under heavy shelling and artillery fire in other parts of eastern and southern Ukraine since February 24, when President Vladimir Putin ordered Russian entry. Armed forces inside Ukraine.

(With information from Reuters and AP)