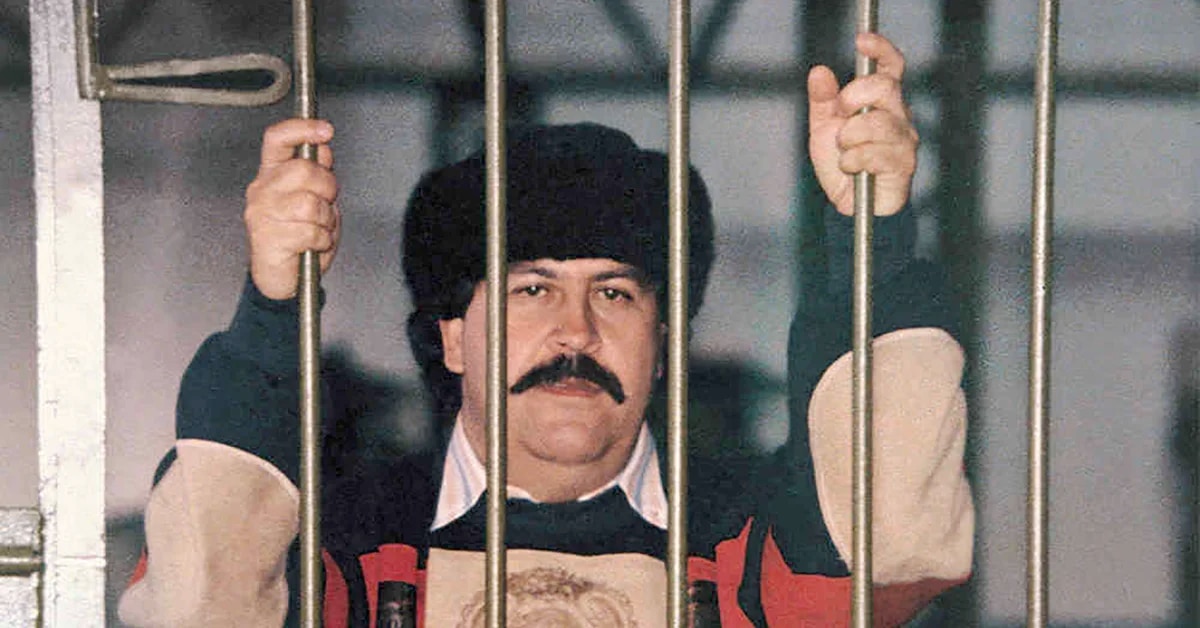 The only photo we have is of Pablo Escobar, the head of the Medellin cartel, when he was imprisoned in La Catral prison in Envicado.

The room had a fireplace, large red, yellow, and blue scented candles, five paintings, a refrigerator full of food and champagne, and a large bed in the center with a water mattress covered in top-of-the-line blankets and blankets. . At night, the attraction was watching Medellin’s illuminated landscape through a large window.

This is not a description of a suite at a five-star hotel in Colombia. That is the place of detention Pablo Escobar GaviriaLeader of the Medellin Cartel, in Cathedral Prison. Not just because of his drug empire, but also because of the political assassinations he ordered.

His cell, with no bars, or wet cement, or scribbled walls, was much less a stinking toilet than any prison.

The place was decorated His wife was Victoria Eugenia Henau. He gave it a romantic tone and imagined sharing passionate nights with the love of his life. The world’s most famous drug dealer.

But the most unusual, unique in the world Escobar Gaviria himself ordered the construction of the prison It was Wednesday morning June 19, 1991 when he decided to turn himself in.

Such was the condition he laid down Cannot be extradited to the US. “I prefer a grave in Colombia to a cell in America”, used to say. His imprisonment was agreed with the government of President Cesar Gaviria.

He was sent by helicopter to “his” prison, accompanied by, among others, the Judean priest Rafael García Herreros.

Rather than a maximum security prison, it was home to gangs and battered men.

Henao was excited. She sees this as an opportunity to pay for her husband’s crimes, stay out of danger, and bring some normalcy to her life with the man she fears so much.

“Finally, after seven years on the run, a sudden sense of sweet peace came over me because I imagined I was going to reclaim my womanhood, my place as a wife, a mother, a mother, a partner, a lover. I thought he would spend many years in jail and pay his debt to the society”, he enthused.

But the criminal who becomes a myth is not going to reverse the fate of drug trafficking, murder and war.

She went to the cathedral several days a week, Pablo met someone or played football, and Victoria took the opportunity to order, change or decorate her husband’s room. But his desire lasted three weeks. Not only does he discover that Pablo is still running the drug business from the inside, but he also discovers dozens of letters that reached El Patrón. They are messages from women from different countries. They sent her romantic messages, asked for violent sex and even sent her nude photos.. A large number of them were given in exchange for money or houses.

Henao was excited. She sees it as an opportunity to make her husband pay for his crimes, stay out of danger, and bring some normalcy to her life with a man she’s so afraid of (Victoria Eugenia Henau – Editorial Planeta)

In his book My life and my prison with Pablo EscobarHainaut reveals: “My astonishment was greater when I read scandalous letters from women who remembered in all sorts of details their recent close encounters with him and invited him to repeat them as many times as they wanted; others wrote flowery texts in which they dreamed of another night in the cathedral. It was scary. I waited for him, and for lack of respect. , I remember making a scene scolding him for not recognizing my commitment and sacrifice to always be with him.

But Pablo told him as usual:

-Data of my life, I can’t help it when girls want to see boys who take care of me.

-You are a liar, Pablo, I don’t believe you, leave me, I want to go back to Medellin, I don’t want to be by your side anymore.

And he left. He followed her and asked her to talk several times, but she refused.

The cathedral was a prison built by Pablo Escobar

There was something already born and it was impossible to change it. The cathedral became a temple of destruction.

After the humiliation Henao suffered, Escobar sent her a bouquet of yellow flowers, as he usually did when he betrayed his wife. “I wouldn’t change you for anything or anyone”. That was his catchphrase while apologizing.

See also  A year after the attack on the Capitol, Joe Biden spoke out and pointed to Donald Trump The US President has said that he will not let anyone stab him in the throat of democracy

Henao did not return to the place of her husband’s “punishment” but thought of her children Juan Pablo and Manuela They wanted to see their father.

The head of the Medellin cartel lived in luxury in prison

“When we arrived I saw a certain malice in the faces of my husband’s lieutenants. It was evident that the female company was outnumbered. I could do nothing.”, in her book The Woman Wentz. He assumed things would be like this: his life and his imprisonment with Pablo Escobar.

And he changed his position. Instead of getting angry with him or making objections, He set out to win it back. Seductive love is more than opportunistic lovers who seek narcotics.

Like those girls, He started sending him letters. But no nudity or indecent propositions. She wrote love poems. He took classes with a poet and philosophy professor.

“They were beautiful letters, they tried to pass only from the heart and from love, any beauty queen who went up to the cathedral. If she lost him as a man, she thought, it was not for lack of love, detail and care. In my thirties I behaved like a young man, and I was a sexist. “I went so far as to see a specialist because I wanted to be better at intimacy. My only intention was to take care of my relationship anyway,” Henau wrote.

Pablo was mesmerized by the mesmerizing game and it went back and forth.

To win Pablo back, Victoria starts sending him letters. But no nudity or promiscuous projects like other girls. I Wrote Her Love Poems (Victoria Eugenia Henau – Editorial Planeta)

Since he can have everything he wants, he asks one of his trusted men, Dirty, to build a pigeon nest in the cathedral. Bought carrier pigeons. Pablo wrote little messages of love that the birds carried without getting lost in the Altos de San Michele building where his family lived.

But Pablo never stopped getting women, though he maintains that he only loves his wife. He reverted to the old movement: About five beauty queens visited him.

One of Pablo’s men, Geronimo, told Escobar’s wife that A double-bottomed truck came to the prison several times with no less than twelve beautiful perfumes and extravagant decorations.

Visits of dignitaries to the cathedral, including footballers Lionel Alvarez (second) and Rene Higuda

The famous goalkeeper of the Colombian national team, René Higuita is going to see him. A rumor said Diego Maradona He was another guest in 1991 when Napoli was suspended for doping.

“I never went to Napoles’s farm, I swear on my old lady I don’t know him. And much less play ball in his luxury prison. He never gave me anything, what he did was terrible. When he couldn’t fill the house he had with more dollars, he started building houses for the poor, But not because he was good, because he was capable of killing children,” Maradona said.

The Star knew that La Catral was a prison with comfortable rooms, billiard and pool rooms, a bar, a football field and cells. Revelries and feasts were held for friends and murderers.

The media called La Catral a “maximum comfort prison” instead of a “maximum security prison”. The military was in charge of security outside the prison, but turned a blind eye to Escobar’s scandalous actions. It is suspected that The guards were bribed and intimidated by Cappo.

But a year later, in that hell of lust and selling your soul to the devil is like giving up a material possession, Escobar missed an opportunity to make amends to society, according to his wife.

According to his wife, Escobar missed an opportunity to make amends to society

The transgressions lead him into a maze with no exit. And he had no choice but to flee. Especially after the government ordered him to be transferred to an army base.

Escobar never imagined the sunset following him. That he is going to lose power like the women who want to be his slaves. Or his killers who left Escobar like he had spread the plague.

There are only going to be those who were by his side and those who will remain so until he dies His wife and children.

He has nothing left. His imprisonment was also unmeasured.

Unbeknownst to him, his enemies were waiting with a tombstone with his name on it with bullets.