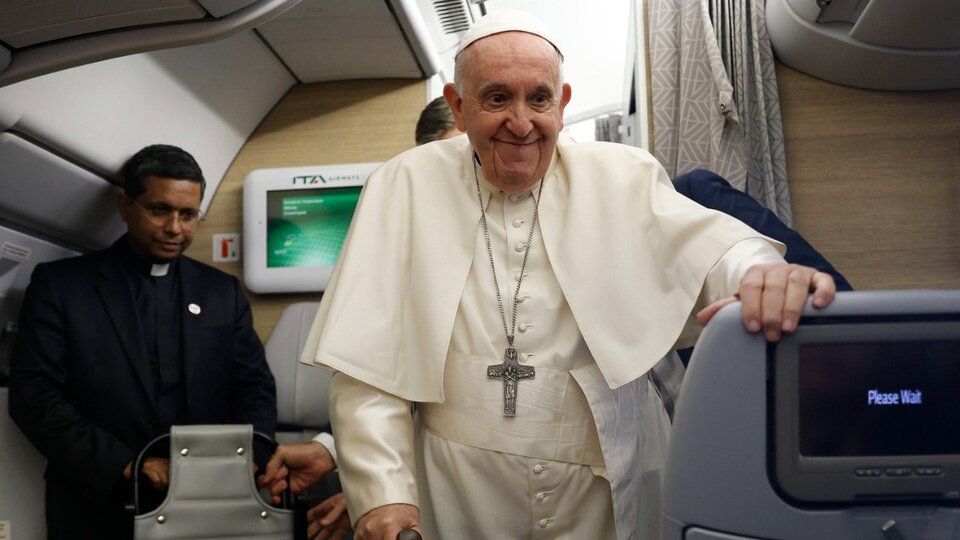 That was raised by Pope Francis on Tuesday His resignation was “not a disaster” because “you can change the pope, it’s not a problem.”Although he denied that he was thinking of resigning in the short term.

“I don’t think I can continue at the same rate of travel as before,” the pontiff admitted at a press conference with journalists accompanying him on the flight. A six-day tour of Canada.

“At my age and this limit, I should save a little to serve the church or rather, Think about the possibility of withdrawal. It’s not a disaster, you can change your pope, it’s not a problem,” insisted George Bergoglio, 85, who used a wheelchair for most of his travels because of a nagging injury in his right knee.

For the Pope, faced with the hypothesis of a resignation, “The door is open, which is one of the normal options, but I never used it until today. I did not think of this possibility. But that doesn’t mean I don’t think about it the day after tomorrow. This trip was a bit of an experiment. “You can’t take trips at this stage, you have to change the style and maybe pay the bills for the pending trips,” he admitted.

Pope, who Covered nearly 20,000 kilometers in less than a week, a cane was used to move around indoors and a wheelchair was used for outdoor travel. “I will continue to travel and be close to people, because I believe that closeness is a way to serve,” he said, referring to possible trips later. He ascended the throne in 2013The Pope has already made 37 trips outside Italy.

In this context, the Pope mentioned some of the trips he may undertake in the future, repeating his desire to visit Ukraine and visit the Democratic Republic of the Congo and South Sudan. So the recovery of the knee should not be compromised.

“I said so I want to go to Ukraine“Let’s see what I find when I return home,” he said, adding that the study of a possible trip by the Holy See will continue to be evaluated in Rome, where he arrived this Saturday morning.

“I want to go to KazakhstanIt’s a peaceful journey, it’s a congress,” he said later about his participation in the ecumenical event in the Central Asian country from September 13 to 15.

“I also have to go to South Sudan because the Archbishop of Canterbury and the head of the Church of Scotland, the three of us, have retreated.“, he elaborated on the pilgrimage to the African country, gathering political leaders at the Vatican to help find a peaceful solution to the crisis.

Francis expected it A trip to the Democratic Republic of the Congo may be “next year”.; Once the “rainy season” is over. “I have all the right intentions but let’s see what Cal says,” he said.

Asked about the possibility of undergoing knee surgery, the Pope said: “Surgical intervention is invalid. The technicians said yes, but there is a problem with anesthesia, I was under anesthesia for six hours and I still see traces,” he recalled of his colon surgery in July 2021.

On the same trip The Pope called the policies of some international credit institutions “colonialist.”. “This theory of colonialism is bad, it is unjust. It is still used today,” the Pope said at a press conference when asked about the so-called “doctrine of discovery”. The Church approved the removal of land from the indigenous peoples of Africa and the Americas.

“For example, some bishops in some countries told me”When our country asks for a loan from an international organization, they impose colonial conditions, legislative conditions to give us a loan.“, the Pope lamented during a 40-minute conversation with journalists accompanying him on his six-day tour of Canada.

“They make you change your way of life,” the pope recalled the country’s bishops, who he did not want to identify, saying before landing in Rome yesterday. Francis thus recalled the colonization of the Americas He rejected “the mentality that we are superior and these tribes are worthless”. This, according to him, characterized the arrival of Europeans to the continent.

“It’s serious. That’s why we have to act on what they say. Go back and clean up what went wrong, but with the awareness that the same colonialism exists today,” he always responded to his comment on the 15th century. Bulls..

“I think that’s the problem with all colonialism Ideological colonialism today Same problem today. He who does not come to the way is lowly,” he finally lamented in that direction.

During a press conference on his return flight from Iqaluit to Rome, The The Pope has also shown some openness to the discussion of contraception in ecclesiastical circles.

“Many things have changed. For example, nuclear weapons, their use and possession are now immoral. Or the death penalty, there we are close to immorality,” the Pope compared, approving the opening of studies at the theological level. Then the Pope, through the Magisterium, would say, “If it goes well or if it goes badly.”

See also  Behind the door: The discovery of a house hidden in its garden for more than 70 years

The Pope’s words are the backdrop to the recent publication in the Vatican editorial of the collected text “Ethics and Theology of Life. Scripture, Tradition, Practical Challenges” in which he leaves open the possibility that the use of unnatural contraceptives may be acceptable to the faithful. In some circumstances it would be “irresponsible” to bring children into the world.

“There is that publication, they are the minutes of a congress and the presentations in the congress, they discuss among themselves and make proposals. Those who created the congress did their duty, tried to move forward with doctrine, but in the ecclesiastical sense, the magisterium will say whether it is going well or not. But the duty of theologians is theological reflection”, he said. and then created

Besides, the next election will be held in Italy on September 25 The fall of Prime Minister Mario Draghi prompted the Pope to call for “civic responsibility” from the country’s leadership..

“First I don’t want to get involved in Italian internal politics. Second, No one can say that President Draghi is not of high international standardHe didn’t have a good career,” he said of the 74-year-old economist, whom he named a member of the Academy of Social Sciences in 2020.

“I asked a colleague a question: how many governments did Italy have in this century? He told me 20. That was my answer,” he added, implicitly joining voices criticizing the institutional stability of a country with 67 governments. Since the proclamation of the Republic in 1946, the average has been 14 months.