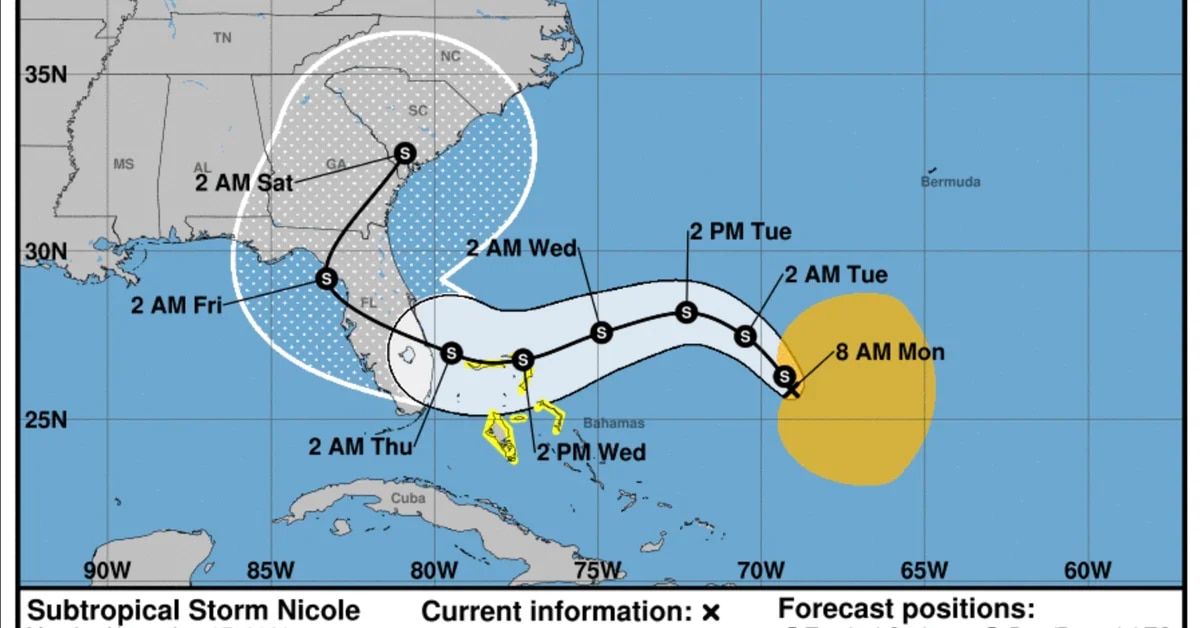 The track of subtropical storm Nicole, according to the National Hurricane Center. (NOAA)

The Subtropical Storm Nicole Formed in the North-East BahamasAnd a part South Florida Now the forecast is in the cone. The National Hurricane Center (NHC) Nicole is expected to bring prolonged hazardous weather to the northwestern Bahamas, Florida, and the southeast coast of the United States. America This week.

Forecasts indicate all Broward and most of the district Miami-Dade Nicole is on her way. The storm is moving northwest at 9 mph (15 km/h). On the forecast track, Nicole’s center will approach the northwestern Bahamas on Tuesday, move near or over those islands on Wednesday, and approach the east coast of Florida on Wednesday night. The NHC predicted in its 2:00 p.m. bulletin that the storm would gradually intensify to become a hurricane or approach Wednesday’s strength. Florida’s east coast could feel the wind speed starting Tuesday.

All indications are that Nicole will be a major storm, regardless of its exact track, including the widespread impacts of prolonged coastal flooding, tropical storm force winds, heavy rain, rough surf and rip currents, and coastal erosion across much of the Southeast. The coast of the United States, the east coast of Florida, and parts of the northwestern and central Bahamas for most of the coming week.

It is important to remember that it is hurricane season Doesn’t end until November 30, but even then the possibility of an out-of-season hurricane cannot be ruled out. For now, everything is running smoothly in South Florida. The important thing is that you stay informed about Nicole’s progress and how she might change your plans.