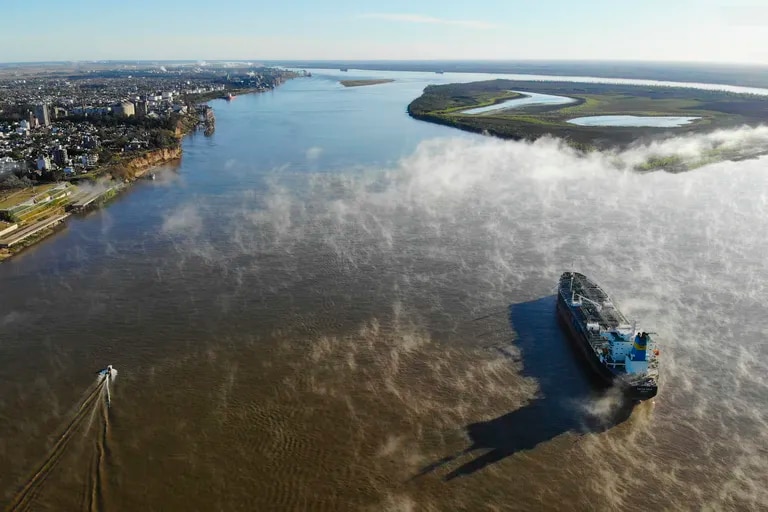 Rosary beads. In the most violent and unsafe city in ArgentinaWhere were they produced? 204 murders So far this year, due to conflicts between drug gangs vying for territory for their illegal businesses, the treasure has been hidden untouched: More than $100 million worth of cocaine was exported.

Between June 21 and August 31, 3,092 kg of cocaine was hidden in the city, a vessel that changed its hiding place while awaiting departure from a local port to Europe. The phantom cargo that few knew would be shipped through Terminal Puerto Rosario (TPR) had an owner: Colombians Jaime Londono Rojas and Alvaro Ramirez DuqueThe men are accused by Interpol of arrest warrants as key cogs in a transnational cartel that has set its sights on this point of the waterway to transport drugs to the old continent.

In Argentina, Londono Rojas and Ramirez Duque are two ghosts. But it is suspected that they were in Santa Fe County for their creation The biggest drug bust in history. The Narcotics Criminal Prosecutor’s Office (Procunar) and the Customs Department have strong suspicions On August 31, 1,658 kg of cocaine was seized from a warehouse in Embalme Graneros, which was to be shipped to Dubai.And this The other two, totaling 1,434 kg, left the TPR for Rotterdam in June and were seized in Santos, Brazil and the Netherlands, belonging to the same owners.

Medicine in a specific way, in plastic bags with tape and black nylon, and The cocaine loaves had a logo or label that was repeated on both loads: Louis Vuitton is a brand of fashion products founded in Paris in 1854.

According to sources in the investigation, customs sent letters to Santos and Rotterdam port authorities – where 568 and 866 kg of cocaine were seized respectively – so they would carry out expert reports on the drug. Embalme is the same one smuggled into a barn in Graneros.

If the suspicion is verified that this amount of drugs belongs to the same international company – it “exported” a part from the Puerto Rosario terminal and the other part was seized in Empalme Graneros. The largest export in the history of the country.

The low profile of the protagonists involved in this conspiracy so far shows that the organization has no connection to the Rosario mob.Engaged in a perpetual cycle of violence, making them unreliable.

See also  Putin confronted a member of his inner circle about how he was managing the invasion of Ukraine.

The Paraná-Paraguay waterway, amid the epidemic, was turned into an outlet for cocaine. to Europe and Asia. If the medicine reaches its target, its value is multiplied five to ten times. From the terminals About 40 tons of cocaine have left Paraguay in the past two years. It was hijacked in Rotterdam (Netherlands) and Antwerp (Belgium).

Santa Fe is the only pioneer that seems close White coal. Between 2005 and 2012, the band they led Carlos Salvador and Patricio Corocito -Both dead- “exported” large quantities of cocaine from the ports of Rosario, Jared and Buenos Aires, which was verified by an investigation carried out by prosecutors Federico Cornel and Carlos Amat, who in 2015 indicted key contacts of the organization.

Rolando de Renzo, a member of this organization, was arrested on March 8, 2012 in Portugal, where he served a nine-year prison sentence for drug trafficking. The charge for the band was in merchandise. That is, with cocaine. He said this in one of his statements Rosario had 10% of the drug. This partly explains the fact that Rosario was filled with drugs, which later became a major dispute between local drug traffickers.

At the beginning of the last decade, Gorosito sold wines in demijohns from a beat-up truck in Arroyo Seco. Suddenly became a millionaire. He connected with Salvador, a Buenos Aires lawyer who lived in the Belgrano neighborhood, and with a group of friends who shared his love of soccer, they began sending shipments of cocaine through charcoal exporting companies in Santiago del Estero and Chaco.

Gorosito became a drug lord with unattainable power. He created Real Arroyo Seco, a club that came out of nowhere, had 12 soccer fields, and was able to be bought by Rosario Central. At the start of the trial in Resistencia, in 2015, was assured Nation He was the “forerunner of Julio Crondona”, Deceased President of AFA.

See also  The EU Observer Mission in Venezuela submitted its report: "We note the lack of judicial independence and non-compliance with the rule of law."

This example helps to dimension the “major leagues of drug trafficking,” the folds of which very few know or prefer not to know. Londono Rojas and Ramirez Duque appear to be links to the organization. The whereabouts of these Colombians remains a mystery. In last Wednesday’s operations, which included a check on the Puerto Rosario terminal, the low-powered local links inside the structure fell: three truckers and a company supervisor. They are accused of being responsible for introducing drugs into the port. Among the 1,658 kg seized were members of the Argentine branch of the gang, including Jose Sofia and Gabriel Nicolau, both from Buenos Aires province. Judge Adrian Gonzalez Sarvey.

Despite the insistence of the judiciary, the concessionaire has not been involved so far The company raised some objections before releasing video footage of trucking yards. TPR said the opposite in a statement: “The company is taking an active and decisive role in the investigation.”

Customs wanted TPR to improve its security conditions because they felt the control system was deficient. Until now, the management agency of the Port of Rosario, which has a deadline until 2032, has not seen a justification to use any permit or abandon the concession.

Vicente’s Group holds majority stake in TPR. The company has been in existence since 2017, when the last shareholder change was Inversiones Bordvarias Andinas (IPAL) with 50 percent. Chile-owned Ultramar Holdings belongs to this company. The rest is divided among the companies from the Agricultural Export Corporation on call to lenders. Vicente’s 10.2% and Sir Cotton’s – 39.8 percent of the group’s plan, born in Avellaneda, north of Santa Fe.

Vicente entered the port in 2010, through the company Aotsa, which bought shares in Pro Puerto. Gustavo Shanahan, former president of TPR He is currently charged with drug trafficking and will add another charge in the coming days for money laundering. On October 16, the businessman was arrested in connection with a federal judge investigating the machinations of a Peruvian drug lord. Julio Rodriguez GrantonThe money changer he received in bunkers at Shanahan’s financial institution overcharged the value of the “blue” dollar by 2% because he knew where the silver came from and the risk involved in operating with it. A mob

See also  A 6.9-magnitude earthquake shook CDMX with an epicenter in Michoane; At least two deaths have been reported

The first shipment of peanuts arrived in Rosario on June 21, coming from General Tejasa, Córdoba. There, the cargo was loaded into six containers, which were loaded on TPR on June 28 aboard Maersk Bermuda, whose intermediate destination was the port of Santos, Brazil, before arriving in the Netherlands. The ship docked at the Zárate terminal.

At Santos, the bags were found to contain 568 kg of cocaine. Investigation revealed that cocaine was loaded Big bags Peanuts in containers at Terminal Puerto Rosario. It is suspected that he may have used it to introduce drugs system to tear overThis is when the seals on the containers are changed after the cocaine is loaded.

The cocaine is loaded into the container after passing through the customs scanner, which inspects the goods at General Deheza.

According to footage provided by the port company compiled by investigators, on June 24, three days after the container arrived at the terminal, three trucks entered the company’s port area and headed toward the peanut loading area. Between 10:48pm and 10:52pm, security camera footage was inexplicably interrupted. When the shooting resumed, a truck was at the DPR gate. At that point the “contamination” of the container is considered to have occurred.

On August 31, Customs received an anonymous complaint that 866 kg of cocaine had left Terminal Puerto Rosario in two other containers bound for Rotterdam, where first 361 kg and then another 505 kg were seized.

Investigators requested information on income and expenses from the port company, which it partially provided. According to the investigation, the drugs were loaded in Rosario on June 25, at the same time as the other vessel seized in Santos.

On June 29, a container loaded with cocaine had a move into the port that was not recorded by the company. On July 3, a container of narcotics was shipped aboard Argentina C.

From photos of the seals, it was clear that it was opened after controls, at which point they found it contaminated with loads of cocaine.