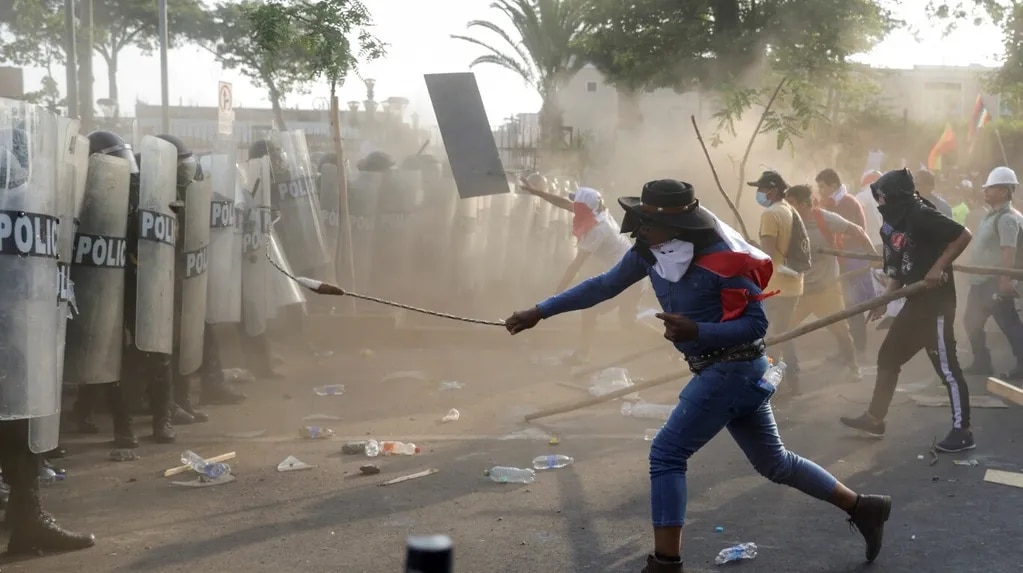 Peru is living through a new day of violence this Thursday, with clashes in Lima and several cities in the south of the country. death.

Thousands of protesters called today “Taking Lima” coincides with a general strike called by the General Confederation of Workers of Peru, the country’s main trade union.

read more: Peru extends state of emergency as protests intensify, with army and police on streets

Clashes broke out between protesters and police in central Lima, Arequipa, Cusco and Puno. Across the country, 127 road sections were blocked in 18 of 25 regions, RPP radio station reported.

The demonstration was organized by supporters of the ousted president Pedro CastilloPresident demands resignation Tina Polwarte.

There are conflicts in Lima, Arequipa and Cusco

Clashes broke out when protesters tried to move towards the Congress. Four policemen were injured, according to local press. In addition, a large fire broke out in an old house near the central Plaza San Martín, although it is not known if it was caused.

The clashes moved to different places in the capital, where thousands of people gathered from different parts of the country, especially from the southern Andes, the stronghold of Castillo.

Meanwhile, around 200 protesters entered a section of the Alfredo Rodríguez Ballón airport in Arequipa, in the south of the country, amid clashes with police. There they burned landing lights and a booth at the airport terminal, one of the city’s main hubs, bringing operations to a halt.

See also  According to a study, the number of deaths due to corona virus infection is three times higher than the official figures.

In Puno, a group set fire to a police station in Makuzani town. More agents should be expelled.

Police deployed 11,800 agents and military vehicles in Lima to quell the riots

Most of the demonstrators came from the south of the country to Lima, which has been at the center of intense clashes that have left more than 50 dead since December 7. The former president was ousted after a failed coup attempt.

Police have deployed 11,800 agents in Lima to control protests planned for Thursday afternoon.

“We have 11,800 police officers on the streets to control the riots, we have more than 120 trucks and 49 military vehicles, and the participation of the armed forces,” said the head general of the Lima Police Region. Victor Janabria.

Meanwhile, two people were killed in clashes between demonstrators and police in Maguzani, southern Peru, near the border with Bolivia, on Wednesday.

With this death, the death toll has risen to more than 50 since the crisis began on December 7.

According to photos released by local media, the city’s police station was set on fire during the clashes.

read more: A policeman in a patrol car was burned alive amid protests rocking Peru.

Police officers were rescued by helicopter during the attack on the police station, the channel reported. No. Television, without showing pictures.

Demonstrators are demanding Boluarte’s resignation, as well as immediate elections in Peru.