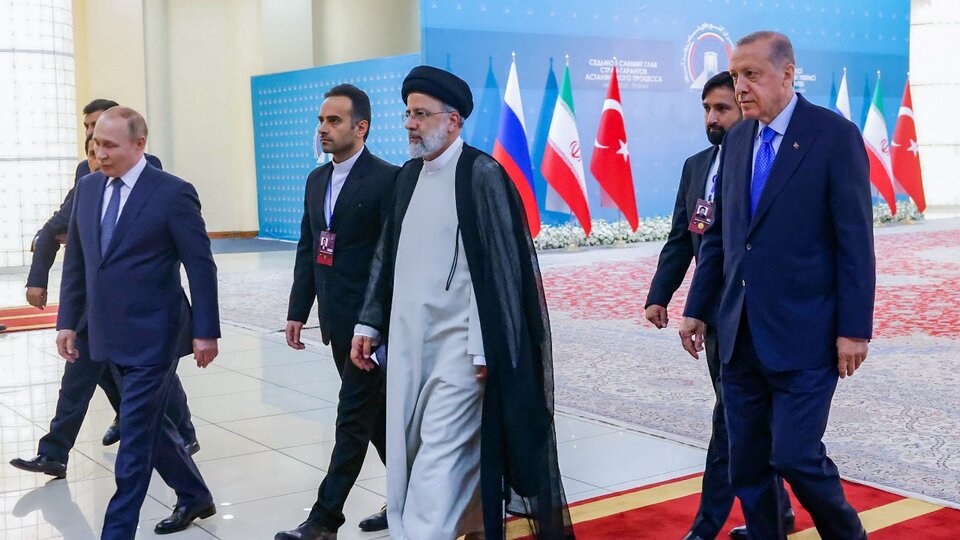 Derivatives of Conflict between Russia, Ukraine and NATO are spreading. In addition to mainly economic effects Sanctions on RussiaExperienced with particular intensity in Western Europe, various results have recently been reached in the political sphere, above all, in an ever-complex situation. Middle East.

A summit was recently held in Tehran Among the presidents of Russia, Vladimir Putin, Iran’s Ibrahim Raisi, and Turkey’s Recep Tayyip Erdoğan, not only have they demonstrated an intention to have clear influence in the Middle East, but they are also capable of challenging the West, mainly AmericaAlmost at the same time Joe Biden toured Israel and Saudi Arabia To show that America still has a decisive weight in the region.

Beyond the dialogue on Syria, the main axis of the meeting focused on the conflict in Ukraine. Raisi and Erdogan have not only shown their support for Putin (in the words of the Iranian ruler, a conflict with NATO is “inevitable”). According to reports from Washington, this support will translate into expressions of military assistance through the use of Iranian-made drones. The Raisi government did not deny the information, which, if true, would take the war to a new level.

Military aspect aside, the main outcome of the meeting in Tehran was economic and energy based. National energy companies of Iran and Russia signed a memorandum of understandingConsidered “historic”, according to which the Russian company will participate in the extraction of oil and gas in various places of the Persian country with a potential value of 40 billion dollars.

The energy deal is a novelty for the two governments, which were sanctioned for different reasons, affecting their own economies, and which are currently trying to show signs of strength (beyond the constant preaching from the West that they are not necessarily “friends” or that they do not form an indivisible unity).

Whatever may be considered an innovation in these times marked by conflict, restructuring and, above all, uncertainty in the short term, Washington’s desire to buy Iranian oilOil prices in Ukraine have risen significantly since the start of the conflict, contributing in part to a drop in the price of a resource encouraged by a policy of economic sanctions applied from the West.

In fact, the Biden administration is conducting assessments to ease sanctions on Iran under the Joint Comprehensive Plan of Action (JCPOA). With this initiative, he seeks to get more oil into the world market without increasing its extraction, a fundamental element of the government’s green agenda. Alternatively, Tehran will find concessions to continue its nuclear policy.

So with that, National Security Council spokesman John Kirby announced that a new nuclear deal with Iran would have “positive side effects,” including lower gasoline prices. Said in the same terms Deputy Secretary of State Wendy Sherman In an interview on July 12, he indicated that reaching a new deal with the Iranian government was still possible, “just saying yes”.

Sherman concluded his speech by saying that the Iranians would “get sanctions relief.” They can improve their economy and sell their oil back and the world needs oil so they can get a good price for it (…). The deal was negotiated with the European Union, France, the Germans, Britain, Russia and China.

Of course, Biden’s move has generated widespread domestic opposition, from companies seeking to increase U.S. oil extraction to Democratic and Republican leaders who oppose a soft policy toward Tehran. Similar resentments can be found in Middle Eastern countries such as Israel and Saudi Arabia, increasingly related to their common fear of Shiite rule. fair enough, Biden’s recent tour of these countries may have been an attempt to calm things down.

sure, Geopolitical Controversy over Iranian Oil In an increasingly globalized world, it is the last step in a completely irrational conspiracy to influence governments that promote sanctions and fines. Fries winter is coming.

Instead of advocating dialogue and concrete initiatives for peace in the tragic Ukrainian situation, NATO leaders continue to maintain a policy of determined hostility towards Russia, despite the crisis they are engulfed in by the lack of energy supplies on a daily basis.