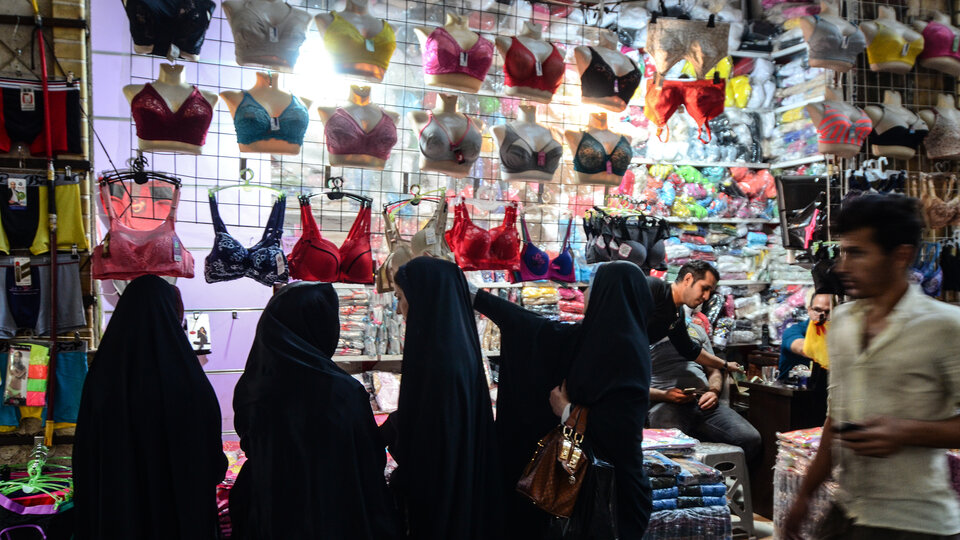 I met three months ago Istar in Tbilisi, the capital of Georgia, is an Iranian fan and actress of filmmaker Abbas Kiarostami. This week he wrote to me in the Messenger from Isfahan, central Iran: “The police beat me, my body is full of bruises; They broke into my car. “They are killing us for fighting against the hijab.” He asked me to delete the chat and consider a phone call dangerous.

Five years ago, I crossed Iran’s desert to the three-thousand-year-old Silk Road station of Yazd and the bundle-like ventilation towers of organ pipes in century-old houses: clay “air conditioners” found in Pharaonic Egypt.

In the alleys leading to the bazaar, women wear chadors and turn into a warm walking triangle with a black cloth that covers the body, head, forehead and sometimes mouth (many dress this way. Others are pressured by the family: only the general “flattening” of the hijab and curves is mandatory). At a mosque, I spoke with Ali Mir, a friendly cleric with excellent Spanish who runs an Islamic center in Ecuador. He opened his briefcase and pasted a photo of Monsignor Arnulfo Romero, who had been assassinated by El Salvador soldiers: “I cried for him when I went to his grave, and when Hugo Chávez died, I held an Islamic ceremony for him.” We climb the spiral staircase with a needle at the top of the onion dome: “Islam is not just a religion, but a culture, a way of life, where everything is united in Allah; From the variety one goes to a higher point unique to God; All is one; That is the philosophy of leadership, the symbol of unity.”

We went into the center room and in came Tania, a young Basque feminist. The three of them sit on the carpet and she says:

–I hailed a taxi in the Azeri area of ​​Tabriz, and the driver, Mohammad — 65 years old, very friendly — began teaching me Farsi. He said “house”, pointed to one, “face” and touched it to me, “leg” and … I patted his hand and he calmed down. He took me to meet his wife and showed her around the house. In a room, she turned her face very thin and touched my breasts. I hit him and started screaming! I was nervous and jittery. The woman heard everything and did nothing; I think he rapes her every night.

See also  Russia-Ukraine war: The mistakes of the renewed Russian military in the offensive that began

Ali apologized to Tania on behalf of good Iranians: “Touching a woman without consent is a sin.” An old woman in black sits on a chair, and Ali tells her about Tania, who received another touch by a taxi driver — “I gave her a scapula on the nose and came out” — and several situations of harassment on the street in the month : “I decided not to take taxis anymore.” . Since the woman was a religious counselor, Tania asked what she could recommend to a foreigner traveling alone to avoid harassment. Ali translated:

–It is natural for some men to desire; To avoid such attitudes you need to know Islamic rules. If they see a beautiful woman alone, they will seek to get closer, which is why clothing is a defense, a wall against men. A loose dress instead of your jeans, apart from the hijab you are wearing, if a man sees you where your wife is not beautiful, he will not be tempted and the wife will not be humiliated. It preserves the integrity of the family; Every woman must hide her beauty to respect another woman. Don’t show your hair and you will see that everything looks different.

Tania told him that she, along with an Iranian friend in Kerman, tried to cover up completely: “Many of them approached us to say violent things, very sexist. My friend was afraid of motorbikes at night; until 10 years ago, if they didn’t wear hijab properly they would throw acid in their faces. The woman was embarrassed. Revealingly, he added: “A woman usually does not travel alone in Iran; Islam does not recommend it; neither does a man. You have to find a partner yourself; a solution is marriage.”

Another Shaykh joins the conversation. In very good English British, resorted to parables: “Bees go to honey; If they don’t want to eat it, you have to put it in a glass box. Tania, though an atheist, shot an arrow at him: “You must carry the weapon, not put the bird in the cage, so that the hunter does not kill the bird.” Sheikh had more ammunition. Please, he said, “If you don’t want your gold stolen, put it under the counter.” Tania put cold clothes: “I have never seen people begging in Iran, or much poverty; I am a social educator and I listen; they say that in Islam there is poverty but there is a lot of resources and unity; this is one of its pillars; here no one will starve, sleep on the street I’m told they won’t, and it seems to be true. I’ve had my bad times, but I’ll stick with the majority of the good ones. It’s not an unsafe country where you’ll meet armed men; almost everyone is kind and generous, but just as patriarchal as the rest of the world. In Europe we’re constantly harassed and raped. , are being killed. When the Popular Party in Vitoria wants to ban Muslim women from covering their hair, I defend them. I want them to be free here without doing that.

Every woman in Iran must wear a veil in the street and be controlled by the morality police. The only relaxation is to cover back from the middle of the head (common in young women). The death of Mahza Amini — 22 years old — five weeks ago, after she was arrested for her veil, sparked a social outcry that left 200 dead.

I consulted Ali about the veil, and he gave his reasons: “It is not an obligation imposed by the government, but by democracy; In the 1979 referendum, 98.2 percent of the people voted for the Islamic system. Hijab has a 3000 year history that predates Islam; In the Shah’s time it was always worn, except when they were obliged to take it off; People voted for the hijab; It is a symbol not only of the Islamic religion, but also of Iranian identity; It’s like carrying your passport: it applies to everyone, whether you’re Muslim or not. If we submit to this, we should allow them to hold hands, kiss and hug.

I told the group that four men who witnessed gay sex would be hanged. Ali said he had never heard of it being used. But it has been used many times. He said he was against the law and said “If a patient wants to affect the society, what is the way to control it? The West liberated homosexuality. Has this resolved anything or are they getting worse every day?

Tania told me under her breath: “They still accept transgender people.” Transgender people approach sex reassignment surgery (government encourages them and family pressures them). Ayatollah Khomeini issued a fatwa: they would be “sick” and the “cure” would be surgery. Iran has 80,000 transgender people with gender identity rights. They are believed to have been born in the wrong body, and sometimes they convince the gay man — who didn’t convert — that the surgery is “normal” (and then the damage is serious). Transgender is not a choice, but a “solution”. And it’s an affirmation of the binary: every opera must wear a hijab.