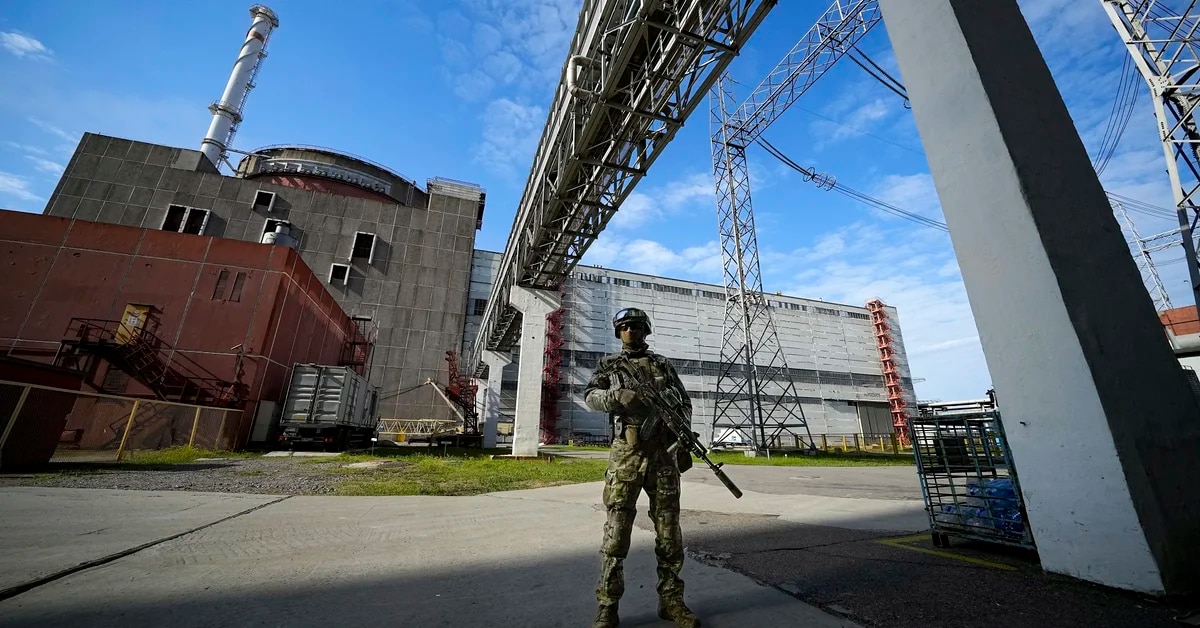 FILE PHOTO: A Russian soldier stands guard at an area of ​​the Zaporizhia nuclear power plant under Russian military control in southeastern Ukraine on May 1, 2022 (AP Photo)

Ukraine addressed the international community this Saturday to force Russia to release the Zaporizhzhya nuclear power plant. Now the plant’s two reactors have been reconnected to the public power gridbefore him Risk of radioactive release.

Ukrainian nuclear company Energoatom believes the time has come “Take urgent measures” so that Russia hands over control of Europe’s largest nuclear power plant to the Ukrainian government “for the safety of the whole world”.

The call is consistent Preparations for the International Atomic Energy Agency (IAEA) to send a mission to ZaporizhiaSomething that could happen “in the next few days,” according to its general director, Argentina Rafael Grossi.

Energoatom blamed the Russian military in a statement on Telegram on Saturday Hit the center combo “again”.“Special military operation” under Moscow control almost from the beginning.

Because of the presence of “Russian troops with their weapons, equipment and explosives” in the facilities “There are serious risks to the safe operation” of the plant.complaint

“Infrastructure is damaged, There are risks of hydrogen leaks and spewing of radioactive materials, And the fire risk is high,” he warns.

The good news is that two active nuclear reactors shut down on Thursday for the first time in history. The plant was opened in 1985They are reconnected to the network.

“Despite several provocations by the occupiers, the Zaporizhia plant continues to operate in the Ukrainian energy system and meet the country’s electricity needs.”Highlighted Energoatom.

A general view of Zaporizhzhia NPP and the fire on August 24, 2022 (REUTERS)

Russia condemns the attacks and denies a military presence

As happened on previous occasions, the Russian Defense Ministry condemned three attacks by Ukrainian artillery near the plant this Saturday, where 17 projectiles would have hit.

Russian military spokesman General Igor Konashenkov insisted that “the radiological situation at the Zaporozhye power plant is within the norm” and categorically denied that the facilities contained “heavy weapons”.

The video, which was secretly recorded by a Ukrainian plant operator and posted on social networks last week, showed Russian military armored personnel carriers in the engine room.

All are waiting for the IAEA, which announced this week the principles of the agreement with the Ukrainians and Russians, committed to guaranteeing the safety of experts, and continuing intensive negotiations with both sides to outline the work.

Ukraine’s President Volodymyr Zelensky called on the IAEA to appear at the plant “as soon as possible” because the “situation is very dangerous and dangerous”.

“If there is a repeat of yesterday’s events, i.e. disconnecting the plant from the batteries, any move by Russia to shut down the reactors will put the plant back on track. One step away from disaster”, he said in his usual late-night speech.

Zelensky believes that the only possible response to the “Russian nuclear threat” is to bring the IAEA plant “under permanent Ukrainian control.”

“That’s why it’s so important Russian troops withdraw from the plant And the threat of bombing the surrounding areas and the plant or power lines connected to it will disappear,” he said.

On Friday, the UN in Krozy, Zaporizhia. The agency, he felt, was “urgently needed”. Visit the plant “very soon”.

While warning of the “vulnerability” of the plant in the conflict zone, he welcomed the working of the diesel generators while the plant was cut off from the external power supply.

Energoatom also denounced this Saturday that Russia was pressuring the plant’s operators not to reveal “the crimes of the plant’s residents and its use as a military base.”

Russia blocked the deal on Friday at the 10th Review Conference of the Nuclear Non-Proliferation Treaty. Precisely because of the Zaporizhzhia power plant, Western countries demand complete demilitarization of the region.

Moscow, which has created a land corridor between the Donbass and the annexed Crimean peninsula through the Zaporizhia and Kherson regions, refuses to relinquish control of the plant.

A nuclear power plant outside the Russian-controlled city of Enerkodar in Ukraine’s Zaporozhye region on August 22, 2022 (REUTERS/Alexander Ermochenko)

Medvedev believes that if Ukraine joins NATO and a military operation takes place against the Russian border, it will mean “the beginning of World War III.”

“Anyway, the situation is under control for now (…) The apocalypse hasn’t come yet, and I hope it never does.” pointed out.

He considered that the Russian troops were conducting a “very moderate variant” of a military campaign, which in other circumstances would go “much faster” and destroy not only the infrastructure, but also the state decision-making bodies of Kiev. .

Regarding the end of hostilitiesKiev’s resignation from NATO is not enough and insists the West must give Moscow security guarantees in writing President Vladimir Putin raised with him at the end of 2021.

The Ukrainian nuclear power plant in Zaporizhia has power back on and one of its reactors is already working
“Environmental disaster”: Pictures of how Russia is burning huge amounts of gas after cutting supplies to Europe
Zelensky called on the IAEA to protect the Zaporizhzhia plant from the risk of global radiological catastrophe.
Fears of a nuclear apocalypse grow: Russia refuses to ratify Nuclear Non-Proliferation Treaty