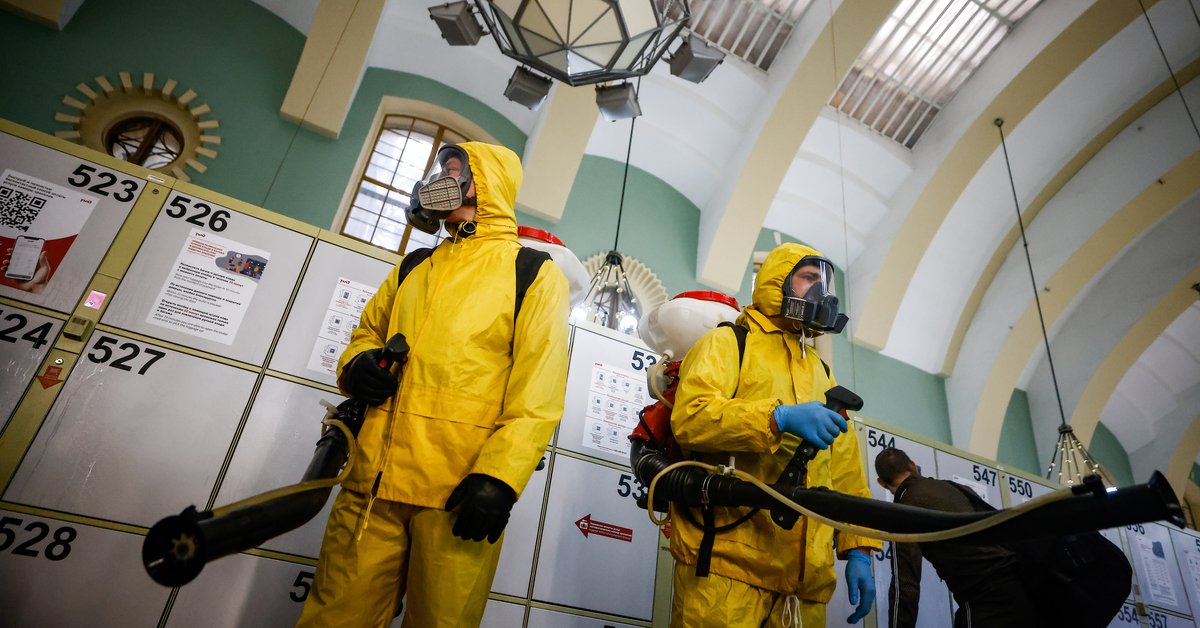 A police officer verifies the certification of the spread of the disease in Kiev, Ukraine, which is one of the countries with the latest cases of Kovid disease and the lowest percentage of vaccines (REUTERS / Valentyn Ogirenko)

The World Health Organization (WHO) showed its worth this Thursday The increase in prevalence in recent weeks has prompted countries to introduce social and public health measures to address the “great concern” and “real threat” of the state of the corona virus epidemic in Europe.

The WHO European region, which includes 53 countries in Europe and Central Asia, including Russia and several former Soviet republics, recorded nearly 1.8 million new cases and 24,000 deaths last week, up 6 and 12% more than the previous year, respectively. The spread has increased by 55% in the last four weeks.

While the increase in cases is common to all ages, the WHO has shown that the “rapid” increase in the elderly is most worrying because 75% of deaths are over 65 years of age.

According to the latest data, the percentage of hospital admissions has doubled in the past week.

An employee of the Russian Ministry of Emergency Situations is engaged in disinfection work at the Kazansky railway station in Moscow. EFE / EPA / Yuri Kochetkov

According to WHO estimates, with 43 countries experiencing “high or maximum stress” in their health systems, between now and February 1, if any reaction at these levels does not spread, there could be half a million deaths.

“We are at another critical juncture in the epidemic. Europe is once again at the center of the epidemic where we were a year ago. The difference today is that we know more and can do more. WHO-European Director Hans Kluge told a news conference.

Close is primarily targeted The “Adequate” vaccine coverage and relaxation in activities are the main reasons for the increased spread, While not forgetting factors such as the weather, the start of the school year, a return to face-to-face work and the dominance of the highly contagious delta variant.

Although Europe is hitting record for new cases, the maximum number of deaths during epidemics is halved, which can be explained by vaccinations.

“Vaccines are essential to combat the acute phase of the disease if we combine them with community and public health measures. Vaccines are never guaranteed to spread, but they do better than they promise: avoiding severe forms of the disease, especially death,” said Cluj from WHO-Europe headquarters in Copenhagen.

Approximately one billion doses are administered in the region, with 47% of the population using the full schedule and the most unequal distribution: two out of eight countries already exceed 70%, not reaching 10%.

The WHO says hospital admissions rates are high in countries with low vaccination rates, such as the Baltics and Central and Eastern Europe, where the majority of admissions and deaths do not meet the guidelines.

Therefore the The emphasis should be on increasing the security of vulnerable groups in those countries and providing a level of motivation for them and health workers, in addition to sharing the level of “global solidarity”.

Stock photo of the person receiving the dose of the Cow-19 vaccine. EFE / EPA / Darek Delmanowicz

See also  Kovit: Denmark, the European country that bet on "living with the virus", is now announcing closures and restrictions.

The WHO praised 23 countries for strengthening anti-epidemic measures in recent weeks, while criticizing seven countries for doing the opposite and calling on each country’s authorities to carefully reconsider any easing of the current situation.

“We need to change our tactics to prevent them from happening in the first place from reacting to Govt-19 eruptions,” Glck said.

Therefore, he defended the usefulness of tools such as masks, especially indoors: If its use reaches 95% coverage, it could save 180,000 of the half million lives feared to be infected in the region by February.

Testing, communication tracking, ventilation in closed spaces, and physical distance were also referred to by Gluke, he described as the “coveted passport”, the “collective tool for individual freedom.”

“Preventive measures will not deprive people of their freedom, they will ensure it. In other words, the best way to avoid locks is to use those measures as a last resort and to keep the spread of Govt-19 at bay,” he said.

The WHO is also concerned about the likelihood of an outbreak of the virus during the winter and near the end of the winter.

The WHO has called for the development of a vaccine against the bacteria that kills 150,000 children a year.
WHO approves emergency use of Indian covaxin corona virus vaccine
The WHO has proposed a new plan to “avoid another 5 million deaths from COVID” and is seeking USD 23.4 billion in contributions.