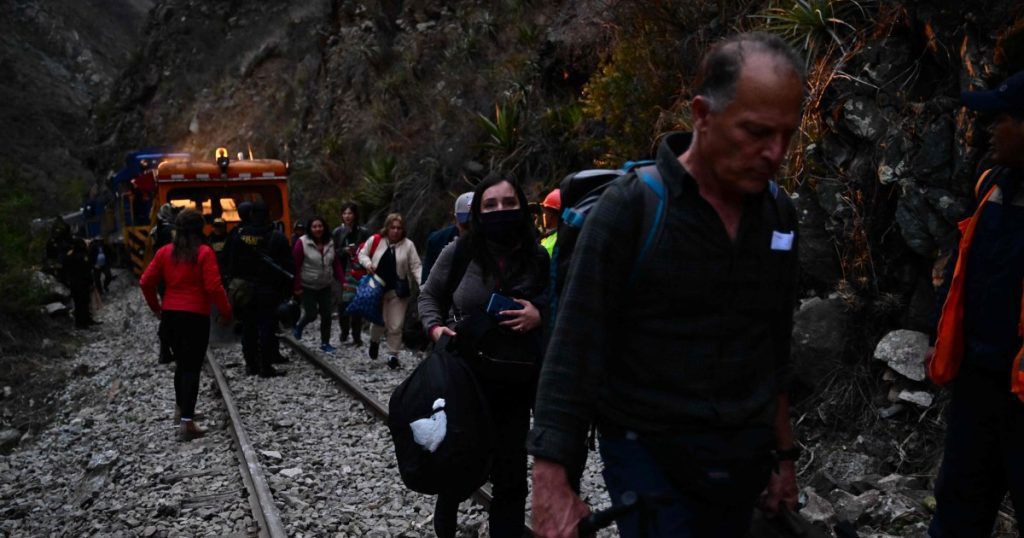 Several highways have been closed and train services suspended, leaving a number of tourists stranded for days in Machu Picchu with no transportation from the UNESCO World Heritage site to an international airport about 50 miles away in Cusco.

Colorado resident Tom Gray’s group made it onto the last bus to Aguas Calientes, the gate to the castle, he tells NBC News in a video interview.

He said dozens are still stuck at the summit.

“Our guide had to bribe the demonstrators to move the rocks to let us go back to our hotel,” said Gray, who first arrived at Machu Picchu on Monday night. He added that their group had to navigate no less than 18 roadblocks constructed by trees and rocks, which are guarded by local villagers.

“It was a space time all around being stuck here,” said Gray.

PeruRail said in a statement released on Tuesday that all trains to and from Machu Picchu were halted on Tuesday Facebook.

“The Government of Peru is organizing the evacuation via four helicopters of the most vulnerable foreign tourists from Aguas Calientes/Machu Picchu Village,” the US Embassy in Lima said in a statement on Saturday.

“The US Embassy has been informed by the Peruvian government that plans are in place to assist all travelers in Aguas Calientes / Machu Picchu Village to leave,” it added.

The ministry said in a tweet on Sunday that nearly 400 tourists from Machu Picchu were escorted by the tourism police to the Ollantaytambo region, northwest of Cusco, and then taken to the airport by bus.

On Saturday, the ministry said it plans to “facilitate humanitarian flights,” with priority given to the elderly and vulnerable.

The violent unrest prompted guidance from the US State Department recommending citizens “reconsider travel” to the country, and similar guidance from other countries including the UK and Spain.

After the warnings, Daniels and McLaughlin booked their flights from Lima for Sunday night and Gray booked his flight for Tuesday. “We can get to the airport in Cusco, that airport is open that will take us to Lima,” Daniels told NBC News, adding that she will make her way once the trains resume.

“We miss our families though; we’d love to go home. Our kids are all traveling with us to be with us for Christmas and they might have it without us,” said McLaughlin.