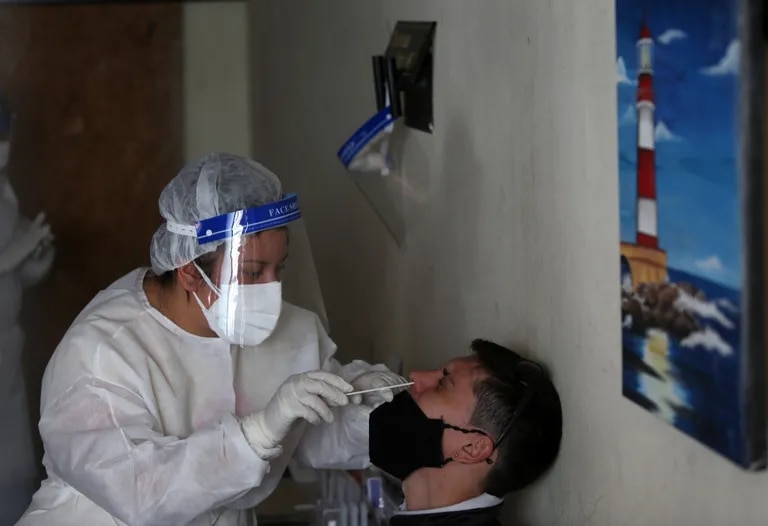 In Last weekreported in the country 52,745 new people have been affected by CoronaAccording to a statement released this afternoon Ministry of National Health. Data is not just material 26% more affected compared to previous weekBut The number of people infected with the disease is higher than at the peak of the fourth wave recorded on the last Sunday of May. However, from the Ministry of Health, it was consulted NationThey haven’t talked about the fifth wave yet.

The Last May 29The weekly official report indicated that 51,778 Argentines had signed the contract Covid-19. Two weeks ago, the Health Minister, Carla VisettiHe had announced his visit of The fourth wave For the country, weekly infections stood at 33,989. After May’s peak last Sunday, numbers began to decline.

For the four Sundays in June, the number of Covid cases decreased markedly each week. However, from July onwards, the curve picked up speed again. A trend of increasing confirmed infections was observed from Sunday to Sunday.

In conversation with NationExpert Angela Gentile said If this increase in cases continues over time, “we could be facing a fifth wave”. The epidemiologist considered this “understandable” because the variation in transmission in the country was “100% omicron”, but it There are subtypes that are “highly infectious”..

For Gentiles, it is important that death and hospitalizations do not grow at the same rate. “Omicron is just as dangerous as any other type, but now we have other levels of vaccine coverage, which means the impact on hospitalizations is being lost,” he pointed out.

The Infectious disease expert Roberto Debach He had no doubts before LA NACION’s question. “I think we’re in the fifth wave.”. For the expert, these days in Argentina the Subtype BA.5 It affects people who have been vaccinated, but not previously infected, depending on what is seen in countries of the Northern Hemisphere. According to Depak, it also reaches people over 60 with three doses of the vaccine.

“It should also be taken into account that it is no longer tested as before, so the number of registered cases should be multiplied by 15 or 20,” he added. Depak asked people with symptoms like fever, sore throat and cough to self-isolate for at least three days to avoid infecting patients with comorbidities.

According to this latest epidemiological report, 91 patients have died of Covid-19 in the last seven days. The death toll has increased by 19.73% compared to last week. While 76 deaths were reported.

Before consulting this journal, Mr National Health Portfolio They said for now “We’re not talking about the fifth wave”. The sources added that in recent weeks, there has been a “decreasing number of cases, with ups and downs”.

“On the date of onset of symptoms, there was not a steady increase, but rather a steady number of layers, which coincided with an increase in the incidence of respiratory diseases seen in winter,” they explained. In this context, the Ministry recommends vaccination with a booster dose and continuity in the use of Chinstrap.

In today’s report, the Nation’s Health Portfolio indicated that 464 people have been hospitalized with the coronavirus in intensive care units, and the percentage of adult bed occupancy in the public and private sector, for all pathologies, is 43.9% in the country.

The vaccination campaign for boys and girls aged six months to 3 years begins this month. According to the national authorities, two doses will be used from the Moderna laboratory, with an interval of 28 days between one and the other.

Although it starts in August, each jurisdiction will determine the exact date to start the vaccine.

The same vaccines will also work as boosters for 3- and 4-year-olds who have received Sinopharm Immunizer.