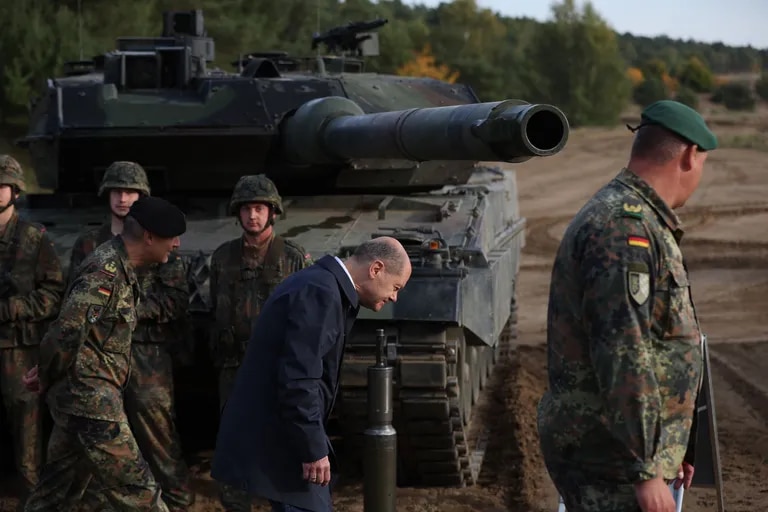 Paris.- Breaking the ambiguity which had hitherto been maintained Pressure from the rest of EuropeGermany announced today “We will not object if Poland requests authorization to supply Leopard main battle tanks”Made in Germany, Ukraine.

“Germany will not oppose Poland if they ask us to”German Foreign Minister said. Annalena Baerbach, during an interview with French channel LCI. Noting that an official request had not yet been received from Warsaw, the minister responded to Poland’s insistence that it could supply Kyiv with German-made Panther tanks, which would require authorization from Berlin to send a third. Country.

France and Germany today celebrated the 60th anniversary of the Élysée Pact, which sealed the rapprochement between the two countries, with the visit of the Chancellor. Olaf Schalls and all his cabinet to Paris. An opportunity to step away from the bilateral tensions that have characterized the past months has gained importanceSholes’ continued opposition to supplying Ukraine with those main battle tanks manufactured by his country. While the German head of government’s response was vague, his foreign minister was more forthright.

Kyiv has been asking the West for weeks to send these assault tanks, which would allow it to mount a real counteroffensive and retake territory occupied by Russia, before Kremlin troops launch a new and massive offensive in the coming months.

Baerbach’s comments came two days after a meeting of more than 50 countries at the US Ramstein base in Germany. Kyiv’s allies announced Considerable arms exports to Ukraine, but no common ground could be reached on the delivery of main battle tanks.

Not long ago, Great Britain, the first country to agree, announced that it would export 14 Challenger heavy tanks in the coming weeks. In contrast, the US has so far refused to supply Kyiv with its M1 Abrams armored vehicles, citing their sophistication and operational costs. France has refused to scrap its Leclerc tanks, citing – among other reasons – the need to maintain its military’s defensive capability, saying it could take decades to replace them. Finally, Germany, whose Leopard was mass-produced (about 2,000 copies) and used by 12 European armies, refused in turn, prompting the need to coordinate with its allies to take this step.

“So far we have been in close coordination with our friends and allies. We will continue to do so on a case-by-case basis,” Scholz said today in a clear message, particularly to the US.

From Germany, from the White House, even from Paris – the reason for this resistance is fear. Ukraine’s major Western allies are considered “co-belligerents” by RussiaFrom the moment those main battle tanks got into kyiv hands that didn’t need defense.

Three weeks after the export of French AMX 10-RC “light tanks” was announced, the French Defense Minister, Sebastien Lecornu, this week recalled the criteria set by President Emmanuel Macron for each arms delivery to Ukraine. The first of these, which perfectly summarizes the general position of Westerners, is the “defensive logic of escalation control”.

Since the beginning of the Russian offensive last February, the Allied governments have been very careful not to fuel this escalation. For this reason, the US has so far refused to send Kyiv long-range missiles or fighter-bombers capable of striking deep into Russian territory. The same reason is valid for the Leopard tanks, although none have been ruled out tonight, as the Ukrainian government can acquire them in the short term. In the past few hours, even some military sources have said so Two or three copies of these armored vehicles will already be in kyiv handsIn order to start training their tankers.

In recent days, many countries, even within NATO, have made no secret of their anger at the comings and goings in Berlin. Prime Minister of Poland Mateusz Morawiecki, Today he described the German position as “unacceptable”.

“This is an unacceptable approach. It’s been almost a year since the war started. Innocent people are dying every day. Russian bombs are wreaking havoc on Ukrainian cities. They are hitting civilian targets, killing women and children,” he said.

Poland is ready to send 14 Leopards to Kyiv and is trying to integrate with the 15-nation group. If refused from Berlin “We will organize a small alliance to supply Ukraine with the modern equipment and tanks it needs.”Morawiecki added, while the German minister’s statement was not yet known. Kyiv is requesting about 200 of these heavy armored vehicles.

On Saturday, the three foreign ministers of the Baltic states urged Berlin to “provide Leopard tanks to Ukraine as soon as possible.”