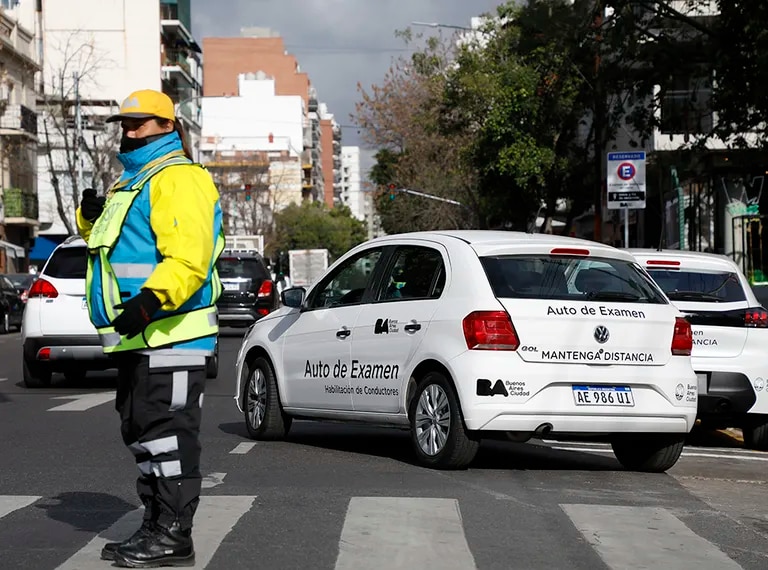 system There will be changes in the issuance of new driving licences It’s important to start this week. New Practical exams will be moved to the street The city is promoting the changes with a push to measure the performance of applicants in real-time, renew more demanding theoretical assessments and age-based validity periods, introduce improvements in road safety and reduce the number of accidents. Long-term roads.

From Wednesday, 30 Dual command vehicles They will start traveling in rounds of up to 500 meters in different neighborhoods with a procedure starting in Commune 12 and then adding other places where the application can be processed. Theoretical and practical license. The implementation will be progressive and shifts will be offered according to availability, but ten rounds in 15 communes are expected to be operational by October.

The two runways, Coronal Roca Avenue (in the south of the city) and Parque Extremo (in front of the airport), which are currently undergoing practical evaluation, will be used exclusively for the operation. Drivers of motorcycles and heavy vehicles, trucks or buses. License renewals will continue to be processed at Roca headquarters and will be available to new applicants until the ten branches are fully operational. Those who have already allotted shifts in Roga, will have to undergo the procedure there.

In the new system, the theory test will have a higher number of questions: 30 to 40And the correct answers to pass the assessment will be 34 instead of 23. As regards the period of validity, For those under the age of 39, it goes up to ten years; The change arose based on statistical studies of driving skills, which indicated that people show a progressive decline in their skills after the age of 40.

The changes will take effect from the expiry of each driver’s individual license (the renewed card will be governed by new validity periods) or from the request for a new registration. The new system doesn’t represent an increase in the city’s updated annual budget of $3,300 in operations.

The city will be the first in the country to conduct procedures in real-world situations and measure the performance of applicants. Similar models are used in France, Finland, Hungary, Netherlands, Spain, Austria, Ireland, Germany, Italy, Japan, Greece, Switzerland and Lithuania.

All circuits are operated by the Secretary of Transportation and Public Works of Buenos Aires and depart from the communal headquarters. With routes up to 500 meters and 15 minutes. After commune 12, communes 2, 3, 4, 5, 6, 10, 13, 14 and 15 will be gradually added. In all cases, hospitals, schools, fire stations and police stations were avoided without increasing the risk. of layout. There will be signs indicating that driving tests are being conducted in the area.

30 vehicles, 22 with manual transmission and eight with automatic transmission (applicant can choose what to do during shift), they will have double pedalboard and command, if required, The instructor may intervene. They will have cameras inside and outside, and will be connected to a monitoring center located at the Roga headquarters, where their movements will be controlled, for example, to detect if the vehicle is exceeding the speed limit. The A service offer was made to KegoSpecial Enjoy and share.

“We believe this change will bring improvement in road safety. We have been working for years to reduce claims, especially focusing on fatal accidents. Target to reduce by 20% by 2023 and 50% by 2030“, the chief of staff stepped forward, Philip Michael.

“Every person driving a car on the street should be well prepared with the necessary knowledge and skills to deal with all traffic situations,” he added.

According to him The latest report prepared annually by the Traffic and Road Safety Observatory of the Ministry of Transport and Public WorksIn 2021, 96 people died due to traffic accidents on public roads. The lowest number in the last 12 years. The data shows that traffic accidents continue to be the leading cause of death among young people: 49% are between the ages of 25 and 54, and the second group is between the ages of 15 and 24. The average age of those who died was 43.

“The new road test tests applicants in a situation they face when they get their license. It makes it more demanding and closer to everyday situations; it’s a comprehensive road safety program,” said the Transport and Public Works Secretary. Manuela Lopez Menendez.

Over speeding and alcohol consumption are major causes of accidents. However, with these changes and increased demands, efforts are being made to raise the bar from licensing beyond practice tests. Theoretical and metaphysical examinations.

With the new norm, the minimum pass percentage in the theory test is increased. Applicant must respond 85% questions correct in 45 minutes; Currently 75% is required in an hour.

Additionally, there will be changes to psychometric assessment with a new, in-depth psychological test designed by experts in the field. Binocular testing, campimetry and glare testing will assess the visual standards required for driving, and the same will happen with the spoken language test. All will be completed with a detailed medical survey of the person included in the affidavit to be submitted.

“20% candidates fail the theory test and it is 25% in the practical test., although this rises to 50% among motorcyclists. For cars, parking maneuvers are a kind of filter. For psychophysical, 10% of under-39s have not passed; This number rises in the elderly, especially in those over 70″, in detail Giulia DominicaniCitizen Focus and Community Management Secretary President.

Based on an analysis of 2,700,000 licenses, the government could verify that more than 90% of renewal cases of people under the age of 39 did not have psychological changes, which is why it was decided to extend the period to 10 years. Segmentation of population. Other changes: 40 to 49 years, valid for 6 years; 50 to 69 years, 4 years; and 70 years and above, 2 years.