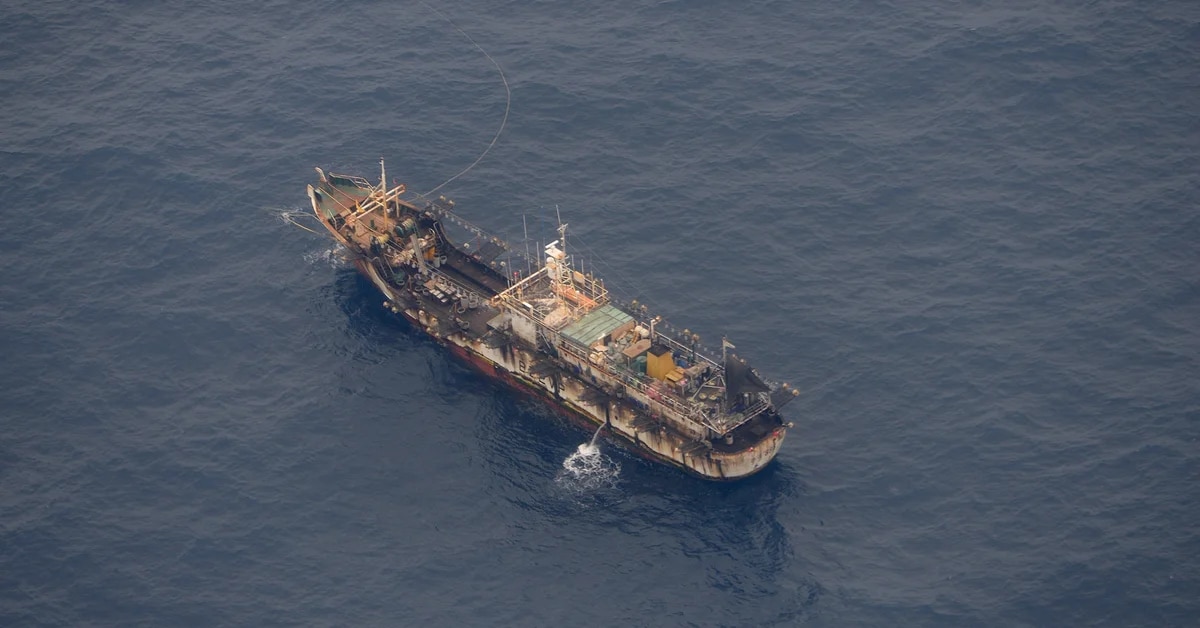 With nearly 3,000 ships, China Built in 20 years World’s largest fishing fleet. The Asian giant’s numerous ships travel the length and breadth of the planet in search of fish as it exhausts its resources in its own waters.

According to a published study The New York Times, From Africa to South America, from the Indian Ocean to the South Pacific, China is seriously compromising the environment. Chinese ships are even close to the coast without any retribution for what they do.

However, various countries are opposing this problem. This type of fishing activity is associated with illegal activities. Since many times They encroach on territorial waters, abuse their own workers and capture endangered species.

In 2017, Ecuador seized a Chinese cargo ship carrying 6,620 sharks, whose fins are a delicacy in China and fetch hundreds of dollars.

However, when Fishing at sea is not considered illegal. This is due to a legal vacuum, as there are no international rules regulating it. Moreover, given China’s population growth and its ever-increasing consumer demand, this predatory activity is unlikely to end in the near future.

In 2020, around 300 Chinese ships were spotted near the island Galapagos, just outside Ecuador’s exclusive economic zone. The ships’ position could be plotted by satellite because they were right on the edge of an area protected by international defense treaties.

“Our ocean can no longer withstand this pressure,” said Alberto Andrade, a Galapagos fisherman.

Andrade added that the presence of many Chinese vessels has made things difficult for local fishermen within Ecuador’s territorial waters.

“Industrial fleets are destroying stocks and we fear there will be no fishing in the future,” he said. “Even the pandemic didn’t stop them.” 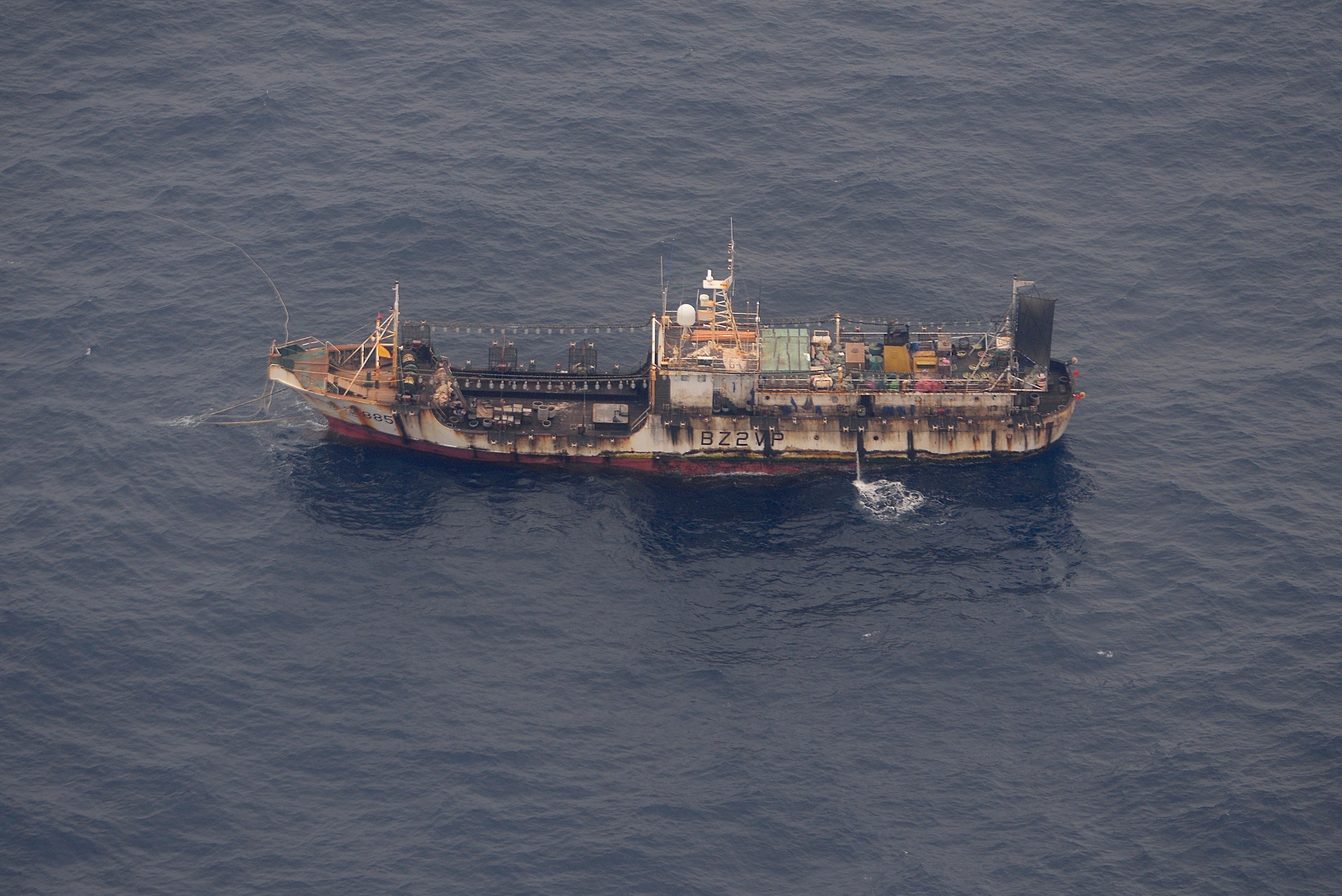 In 2020, about 300 Chinese ships were spotted near the Galapagos Islands EFE/Marcos Pin/File.

Ships like these are the main reason China can fish on such an industrial scale Hai Feng 718 Refrigerated Cargo Ship, built in Japan in 1996 – registered in Panama and managed by Zhongyu Global Seafood Corporation in Beijing. However, its owner is the China National Fisheries Agency.

This transport vessel is refrigerated to preserve tons of fish. And the most important one is that Carries fuel and other supplies to small vessels, so they don’t waste time returning to port. The result? Almost continuous fishing.

Hai Feng 718 has more than 150,000 cubic meters of cargo space, which can fit thousands of tons of fish.

According to data from research organization Global Fishing Watch, Hai Feng 718 encountered at least 70 small Chinese-flagged fishing vessels over a one-year period beginning in June 2021. Each transfer represents an exchange of tons of fish.

“Together, the boats followed the coast of South America, which became a year-round search for catch,” he says NYT.

First, the Hai Feng 718 left the port city of Weihai and arrived in Galapagos in August 2021. It spent nearly a month in the waters of Ecuador’s exclusive economic zone and served numerous vessels such as HP 8588.

A month later, this Chinese fleet sailed to the coast of Peru. There, stealthily, Hai Feng 718 repeatedly approached two dozen smaller ships. After the looting, this “mother ship” returned to China, but already in December it headed west through the Indian Ocean. Squid arrived on Argentina’s coast in January for the start of the season. In May, he already returned to the coast in front of the Galapagos. 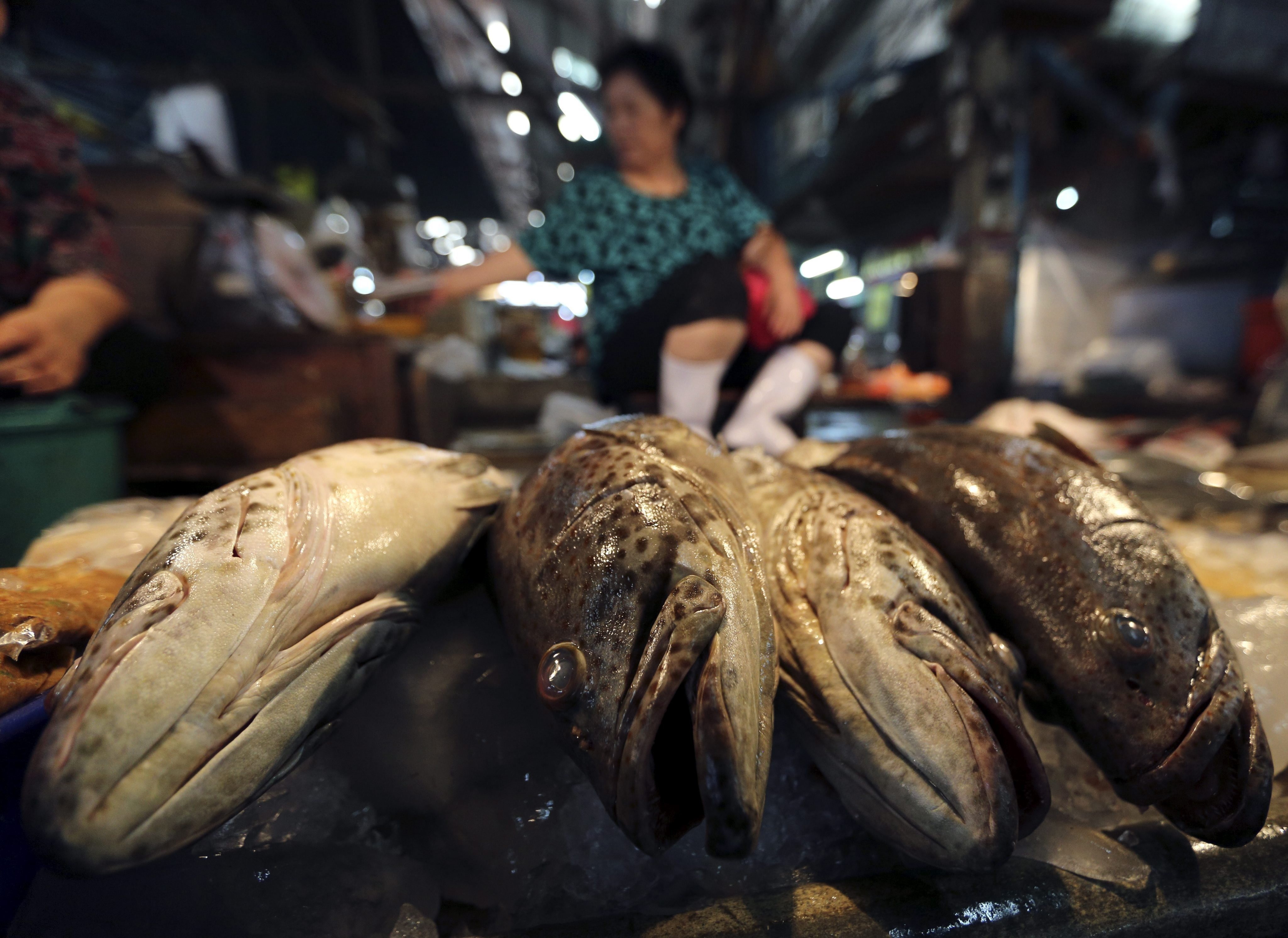 Chile has also reported the presence of Chinese vessels near its territorial waters EFE/Narong Sangnak/File.

According to a Global Fishing Watch report, in 2019, China accounted for nearly all of the squid boats operating in the South Pacific, a boom in squid harvesting: Between 1990 and 2019, the number of deep-sea squid fishing boats rose. Six to 528.

Using a mothership isn’t illegal, but experts say it makes it easier to downplay a catch and hide its origin. Other countries that implement this practice include Japan, South Korea and Taiwan. But of course. None at the level of China.

Also, experts warn Smaller vessels may be turning off their transponders to avoid detection and conceal illegal or uncontrolled catches.

“The impact on some species, such as squid off the coast of South America, is difficult to accurately measure. In some regions, such as the South Pacific, international agreements require countries to report their catches, although underreporting is thought to be common. In the South Atlantic, there is no such agreement”, it reads. NYT.

There are already worrying signs of widespread environmental decline.

“There is concern over the large number of boats and lack of accountability to know how much is being fished and where it is going,” he said. NYT Marla Valentine, Oceanographer, Conservation Group, Oceania. “Y I am concerned that the impacts that are happening now will continue in the future. Because squid is not the only one affected,” he added. “It’s everything that feeds the squid.”

The appearance of a Chinese fleet off the edge of the Galapagos in 2020 focused international attention on the industrial scale of China’s fishing fleet.

In 2020, Ecuador filed a protest with Beijing as the Chinese navy appeared on the edge of the Galapagos. The then president, Lenin Moreno, pledged to protect the area, which he described as “the center of life for the entire planet.”

exposed before the eyes of the world, China responded by offering concessions and announcing sanctions Fishing in some areas. However, critics pointed out that the restrictions apply to seasons when fish are not plentiful.

According to NYT While the Asian giant did not reduce the size of its deep-sea fleet, it also pledged to reduce government subsidies to fishing companies, many of which are still state-owned or controlled.

“In the year following the Galapagos craze, most of the Chinese fleet was far from Ecuador’s exclusive economic zone. But He continued fishing as before”, adds medium. 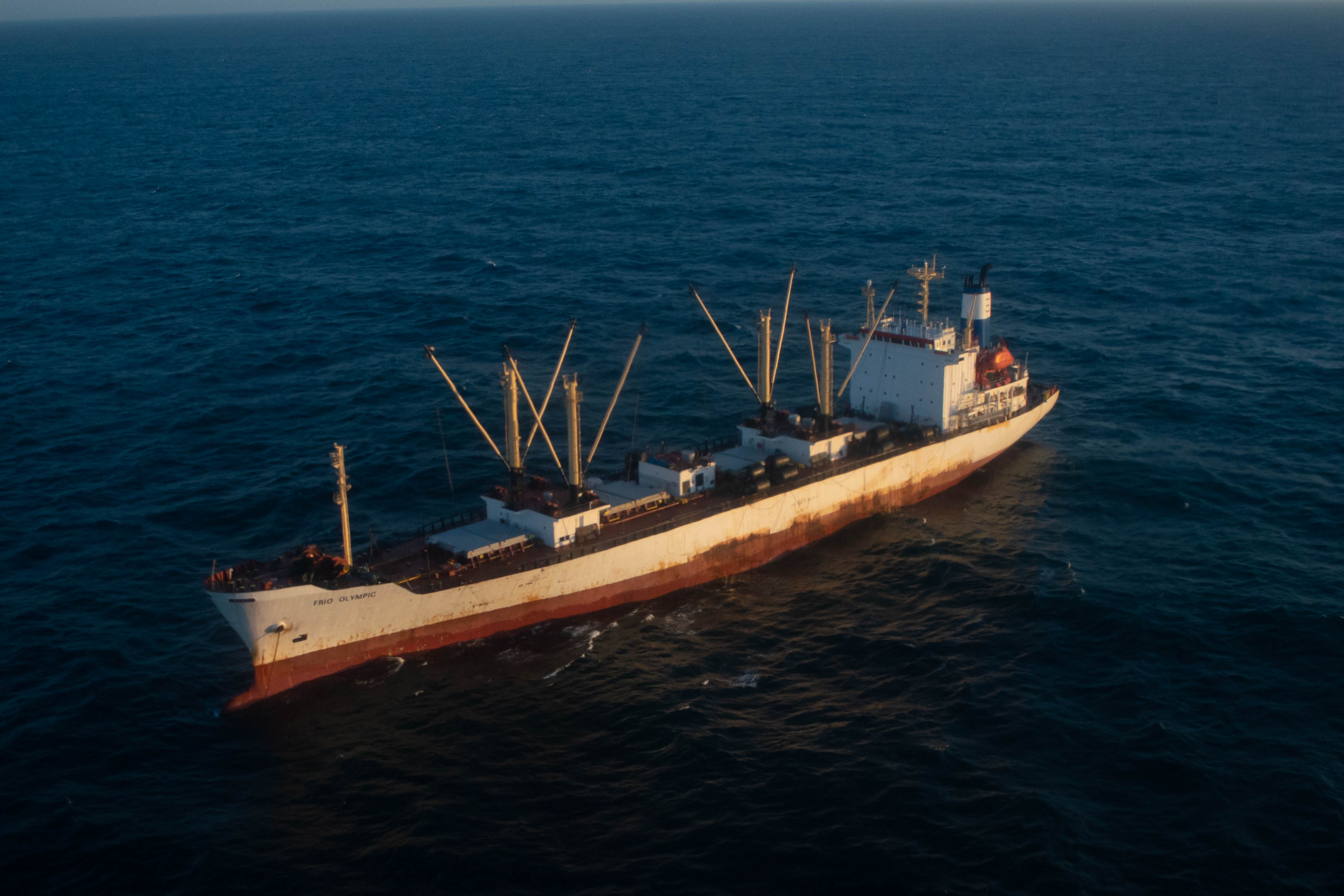 The appearance of a Chinese fleet off the edge of the Galapagos in 2020 has focused international attention on the industrial scale of China’s fishing fleet (Photo: Franco Fafazuli)

The statement times indicates that ArgentinaA group of environmentalists backed by marine conservation organization Gallifre Foundation filed an injunction in the country’s Supreme Court in 2021.

The initiative urged the government to do more to meet its constitutional obligations to protect the environment. A similar precaution is planned to be offered in Ecuador in the coming months.

“We have a permanent Chinese navy 200 miles off our coast”Pablo Ferrara, a lawyer and professor at the Universidad del Salvador in Buenos Aires, told the NYT, noting how far Argentina’s exclusive economic zone has traveled.

In 2016, the Argentine Navy sank a Chinese fishing boat inside its exclusive economic zone. Since then It was announced that four new patrol cars would be added to intensify its control efforts in its coastal waters.

Amid advances by Chinese vessels, the U.S. has pledged to help smaller nations combat illegal or unregulated fishing practices. The US Coast Guard patrolled the South Pacific

“In July, President Biden released a national security memo pledging to increase regulation of the industry. Speaking at the Pacific Nations Forum that month, Vice President Kamala Harris said she would triple U.S. aid to countries to patrol their waters, providing $60 million a year for the next decade.

According to the outlet, these efforts may help in territorial waters, but do little to control China’s fleet in the open seas. Fish consumption continues to increase worldwide2019 reached a record high. At the same time, known populations of most fish species continue to decline, according to a recent report Food and Agriculture Organization of the United Nations.

“The challenge is to convince China that there is a need to ensure the long-term sustainability of marine resources,” he said. NYT Duncan Currie is an international environmental lawyer who advises the Deep Sea Conservation Alliance. “It won’t last forever.”

(With information from The New York Times)

“They have nothing to lose”: Why young Iranians are once again speaking out against the regime
How Putin’s War in Ukraine Will End
Milko Schwartzman, expert on illegal fishing in Latin America: “Countries look the other way because of China’s pressure or ideological connection”
The US, Japan, Australia and India have agreed to launch a system to monitor illegal fishing from China