President of Iran, ultraconservative Ibrahim RaisiHe vowed to take “decisive action” against the wave of protests that have rocked the country since the death of the young Kurdish woman. Mahza Amini In custody of the morality police.

Raisi described the protests as “riots” and called for “decisive measures to be taken against those who oppose the security and peace of the country and people”.His office said he spoke to relatives of the slain Basij militant in Mashhad on Saturday.

As per the official balances, At least 41 people have died due to the crackdown, human rights groups say the real number is much higher. Also, members of the regime’s security forces have also lost their lives.

Hundreds of protesters, reform activists and journalists have been arrested After Amini’s death on September 16, mostly nocturnal demonstrations and street clashes erupted and later spread to dozens of cities.

These are the biggest protests in Iran in nearly three years, led by women And they are not motivated by noble political or economic grievances, quite the contrary Rejecting the Islamic Republic’s strict gender-based dress code.

Amini, known as Zina in Kurdish, was arrested on September 13 for violating regulations requiring her to wear a well-fitting hijab over her head and, among other things, banning ripped jeans and brightly colored clothing.

Since then, Some Iranian protesters took off and burned their hijabs at rallies and cut their hairthat; Some danced near large bonfires to the applause of the crowd chanting “Jan, Zendegi, Azadi” or “”.Woman, life, freedom”.

Amid social upheaval in Iran, a woman confronts police as a sign of rebellion

Oscar-winning Iranian film director Asghar Farhadi has added his voice in support of “progressive and courageous women who join men in fighting for human rights.”

“I saw anger and hope in their faces and the way they marched through the streets”, he said in a video message on Instagram. “I deeply respect their struggle for freedom and their right to choose their own destiny no matter how cruel the atrocities they are subjected to.”

Even as authorities block internet access, the world learns much of the turmoil and violence through shaky mobile phone footage posted and circulated on social media.

A widely shared video shows a young woman with flying hair, dressed in black and wearing a helmet struggling with security forces, before being pushed to the ground, the back of her head hitting the curb, getting up and being helped by other women.

Protests abroad in solidarity with Iranian women have been held in recent days in cities such as Athens, Berlin, Brussels, Istanbul, Madrid, New York, Paris, Santiago, Stockholm, The Hague, Toronto and Washington. 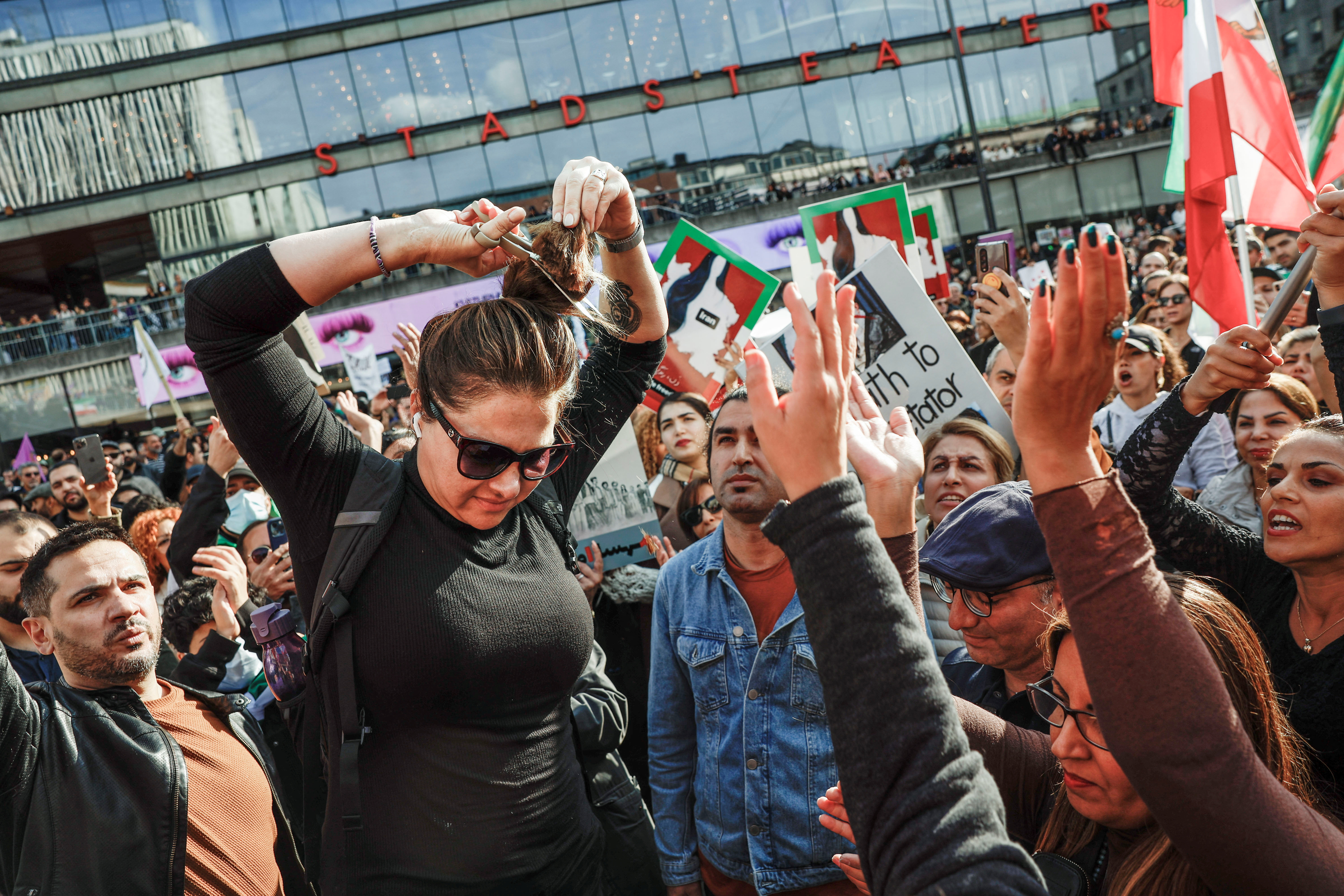 A woman cuts her hair during a demonstration against the Iranian regime in Stockholm (TT/Reuters).

Iran – led by Supreme Leader Ayatollah Ali Khamenei, 83, and isolated and punished by sanctions over its nuclear program – has blamed a “foreign conspiracy” for the unrest.

It has organized large rallies in defense of the hijab and conservative values, and another pro-government rally is planned for Sunday in Engelab (Revolution) Square in central Tehran.

The main reformist group inside Iran, the Islamic People’s Union Party of Iran, has called for a mandatory dress code and reduced police morale.

The party – led by former aides to former president Mohammad Khatami – who oversaw a thaw with the West between 1997 and 2005 – has called on the government to “authorise peaceful demonstrations” and release prisoners.

Human rights groups abroad have sought to shed light on the turmoil in Iran from their own sources inside the country.

The Oslo-based Iran Human Rights Group put the death toll at 54, not counting security personnel. He also said that in many cases the authorities would request families to have secret burials before handing over the bodies.

Iranian authorities have not yet announced Amini’s cause of death.Died as a result of a blow to the head, according to activists.

Interior Minister Ahmed Vahidi has insisted that Amini was not attacked and that we will have to wait for the final opinion of the forensic doctor, which will take time.

Iran’s Ayatollahs cornered by hijab, re-education centers and morality police
“They have nothing to lose”: Why young Iranians are once again speaking out against the regime