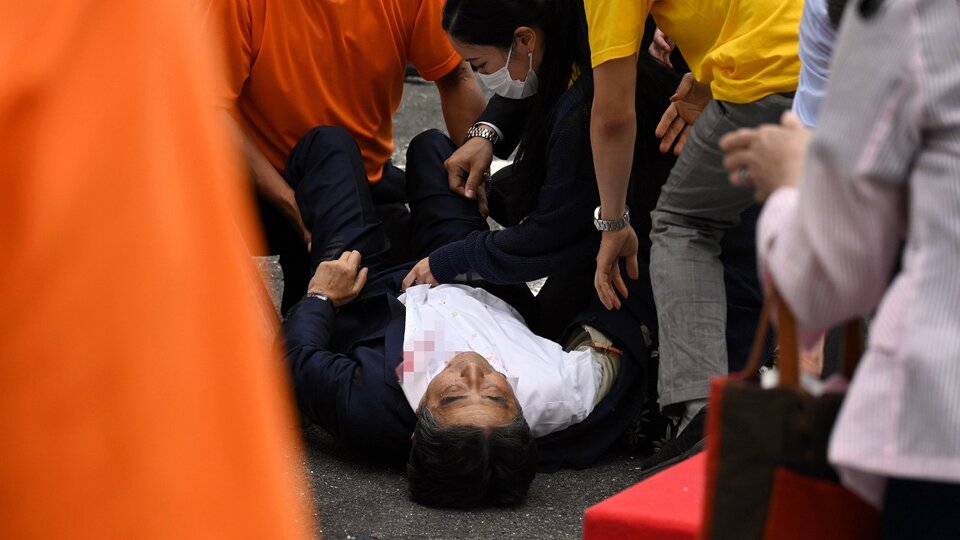 On Friday morning, the former Prime Minister of Japan, Shinzo AbeHe was talking on a street in Nara — the former imperial capital, whose thousand-year-old pagodas are visited by serfs asking for affection — when Two shots from a homemade pistol It pierced his chest and neck, An event comparable in its local scale to the assassination of John Fitzgerald Kennedy in the United States.

With nine deaths by firearms in 2018 — versus 39,740 in the U.S. — the scale of crime for a community is all the more shocking because of its highly exceptional nature. Y The indication is that Yamagami Tetsuya – a former soldier – had to prepare his pistol to kill Abe.

According to Marion Moya, anthropologist and director of the Center for Japanese Studies at the National University of San Martin, “The Japanese are not a non-violent society, but a society that represses violence and effectively represses self-repression; When it rises, it takes on the dimension of a volcanic eruption. Usually nothing happens; It is credited with maintaining harmony by avoiding conflict (given its Confucian roots). Against violence – the specter of World War II – the impact of an already impressive event extends far beyond countries where violence takes place daily. From a Japanese point of view some would classify it as an act of terrorism – understandably so – while for us it would be a political act. To call it madness is, in a way, to depoliticize it and remove all burdens on society., to be deposited with the individual only. But we have to take it with a grain of salt; The motivation is still unclear.

This Friday’s editorial The Japan Times It begins: “Original editorial opinion written to fill this space by A cri de coeur -A Heartfelt Cry for America- A sensitive plea to stop the destructive violence of handguns that changes daily. But with extraordinary sadness and anger, we are compelled to change that view by mourning the murder of Shinzo Abe.

to Matthias Chiappe -Professor at the Center for Asian and African Studies (CEAA) of El Colegio de Mexico- “I avoid seeing this as a madman’s matter; I understand that this person is taking a political stand – extreme and criminal, no need to make it clear – in a critical situation for a society with discontent, anger and rage against politicians; This is common for Argentina, but the yen has devalued by 20 percent, something unthinkable for Japan. For 20 years, in the 70s and 80s, they’ve been experiencing the collapse of a system that included more people working for one company for life, and the bursting of the financial bubble in the 90s. With the epidemic, many SMEs were linked. This is the context in which this crime is overflowing, in a society where it is very difficult to transmit a counter-hegemonic discourse in the media; The fact that the crime was committed two days before the elections makes it clear that this extreme gesture is intended to leave a message of disaffection in politics.”.

According to Mario Bokerin Japanese expert at the Autonomous University of Baja California, Mexico- “I suspect that whoever killed him had nothing to do with politics; Although we don’t know yet. They’ll have a mafia-like political culture that you like in Japan, but they won’t solve their problems with bullets. Regardless, I don’t think Abe was a fascist or a militarist who wanted to go back to imperial Japan; Citing Chinese, Russian and North Korean threats, he has proposed changing the national constitution to reorganize the country. It pointed to “restoring the national essence”. The Japanese political spectrum is markedly different from that of the West; When we talk about left and right, we’re not always talking about liberals and classic conservatives; There, politics has more to do with the issue of identity. In a politically, socially, and psychologically self-restrained society – I can’t imagine the Japanese less willing to engage in public action than bullets. The assassination of a prime minister — Abe was already a former — had not occurred since 1932 in an environment marked by militarism. Was it an act of rebellion or a madman seeking glory like Ronald Reagan? If it’s the former, I guess they’ll never tell. If it’s the second, we’ll know right away”.

See also  Govt-19: The Ministry of Health has removed the recommendation of compulsory social exclusion

Shinzo Abe has been Japan’s defining politician for the past 20 years. He came to power with the Liberal Democrats (PLD) as the youngest prime minister since 1945, but with an ultra-conservative family lineage that marked his career as a “hawk”: his father was foreign minister in the post-war period and his grandfather Nobusuke Kishi He was a minister in the War Cabinet Admiral DojoParticipating in bombing decisions Pearl Harbor. In fact, he was imprisoned for war crimes but not convicted by a Tokyo military court, wielding shock power against Communist China through a political pact with the United States (he later served as prime minister twice and strengthened ties with the Americans). According to Marion Moya, the most nationalistic sector of society – which encourages close ties with the US – is the equivalent of the country that defeated them in World War II. feeling –Reverend Master– deserves respect because they are the only ones in history who have defeated them.

Only guns are sold in Japan – difficult to disguise – and handguns are banned. To apply for a license, a buyer must attend a course and pass a written and shooting test, with a 95 percent pass rate in both. A rigorous study of the person’s history – criminal record, his psychology, debts, criminal record, relations with family and friends – is done, and if approved, he must inform the police where he keeps weapons and ammunition in separate cupboards. -, when visiting once a year to check everything. The whole process has to be repeated every three years. A person can have only one weapon, and if found to have a second or illegal one, they face up to 15 years in prison.. Anyone who fires a gun in public faces life in prison (Abe’s killer could be sentenced to death). As a result: Japan has 0.25 guns per 100 people (the US has 120) and they – for different reasons – have one of the lowest crime rates in the world.. The last time a politician was shot dead was in 2007: the mayor of Nagasaki, Here it is.

According to the philosopher Byung Sulhan“Violence in performative societies “moves from the visible to the invisible (…) from the real to the virtual, from the physical to the psychic (…) and recedes into subcutaneous, sub-communicative, capillary and neural spaces. It may give the impression that it has disappeared”, but it continues to haunt peoples. Transferred to the interior, they do not immediately release their destructive energies: they expand them mentally. When someone is overcome by this hell, they burst or explode.

Shinzo Abe’s assassination will mark Japanese politics for a long time, a shock with unintended consequences like this one, by a man who never took a political action, perhaps spent his entire life internalizing his frustrations. The function of a Confucian society – until one day he could not bear it: He knew that Abe would talk about his house, and he walked a few steps behind his victim’s back and expressed his disgust in the worst possible way.