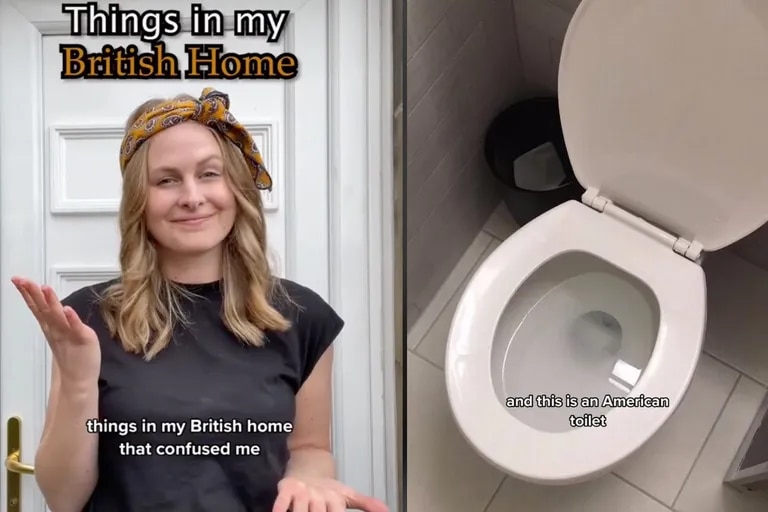 This is very common when one moves to another country. The first thing you notice is the cultural differences Many times it is believed that they all share the same characteristics with their country of origin, this is not the case.

One woman compared not only the customs but also the toilets of the US and England where she now lives.. There he found several differences, and one in particular caught the attention of TikTok users, who took the video viral.

Jackie Dodd joined the trend of comparing countries and made a video to talk about it. “The bathrooms are really different, this is an English bathroom and this is an American bathroom”, said @ while showing how everyone looks on their account.Jackydad_. Apparently, one detail surprised him.

“The water level in the English toilet is very low And instead of a handle for unloading, there’s a small button at the top. Oh, and instead of referring to it as a bathroom, they usually call it a ‘toilet’ or a ‘toilet,'” Tiktoker said.

Although he said that It was a specific case and he wanted to show what he had personally experienced in British territoryThat is why he does not rule out that others have a different reality: “These are specific to my home and others in my area. Not everyone in England has to be like this”, he pointed out.

Apart from toilets, TikToker also listed other situations that strongly grabbed her attention. As he commented, he was already used to them, but initially the adaptation process was very annoying and uncomfortable.

For example, There are very few outlets where electrical appliances can be plugged into the bathroom.To use a hair straightener, you need to plug in an extension or do the job in the living room.

Further, He also pointed out that the buttons to turn on the light in the bathroom are usually on the outside. He showed there that when someone was inside, anyone could go out of the room and turn it off.

After Jackie’s video went viral, TikTok’s virtual community posted their own interpretations and opinions. Some agreed with her, but others argued that what she saw were natural features of cities.

“Everything is better in England”, “That US water level is crazy”, “Too much water in the toilet”, were some of the comments people left. Some of them They thought it was wrong to put a lot of liquid in the toiletFrom the moment someone has to use it, the body is splashed: “Splash again”, is how one user called the effect of the weight falling into the water and soaking everything around it.