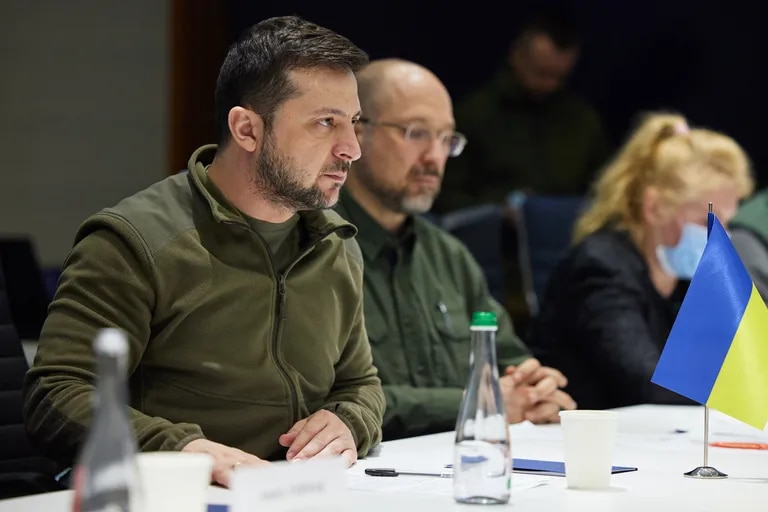 Ukraine and Russia are developing jointly A peace plan Kyiv declares itself neutral and accepts some restrictions on its armed forces, subject to the terms of the provisional 15-point agreement, ceasefire and withdrawal from MoscowThe three men involved in the talks have given information to a British newspaper The Financial Times.

Proposed agreement – Ukrainian and Russian negotiators fully discussed for the first time on Monday – ie kyiv abandons its ambitions to join NATO and promises not to hold foreign military bases or weapons In exchange for the protection of allies such as the United States, Great Britain and Turkey.

Although Moscow and Kiev today said they had made progress on the terms of the agreement, the first sign of progress was, Ukrainian officials doubt Russian President Vladimir Putin’s commitment to peace They also worry that he may be taking the time to reorganize his forces and continue his offensive.

Mikhail BodoliacSaid a senior adviser to Ukrainian President Volodymyr Zhelensky The Financial Times What Troops of the Russian Federation leave the territory occupied by the beginning of the invasion on February 24 anyway., I.e., the southern parts of the Azov and Black Seas, as well as the eastern and northern regions of Kiev. Ukraine will maintain its armed forces, but will remain Forced to stay away from military alliances like NATO It no longer operates foreign military bases on its borders.

For his part, Putin’s press secretary, Dmitry PeskovTold reporters on Wednesday Ukraine’s neutrality was possible based on the position of Austria or Sweden. “This option is actually being discussed now, and it is an option that can be considered neutral,” the official said.

But what is neutrality based on the position of Austria or Sweden?

Austria and Sweden are two non-NATO countries. “Neutrality is part of the Austrian identity”, Martin Sen, a political scientist at the University of Innsbruck, recalled. This law, Imposed in 1955 by the SovietsHitler’s ally Austria, which had occupied the country with the West for ten years, was transformed into a scene of historical encounters.

Khrushchev shook Kennedy’s hand in 1961, and Brezhnev Carter shook hands in 1979. The UN, like other international organizations, established its headquarters. Since then, The Vienna government supports peace in the world and continues to be the framework for many bilateral talks.

However, Austria is no longer completely impartial. In 1995, it joined the European Union (EU) and participates in the General Security and Security granted by the 2009 Lisbon Treaty.. According to Martin Sen, the country has never “really discussed” neutrality, and now an “urgent” debate is developing.

Russia, traditionally close to Austria, has been criticized for “neutrality on the face”. Vienna by supporting the Ukrainian cause, With some exceptions, such as Serbia, as in other Western countries. “This terrible war a few hundred kilometers away is necessary to stop us from being innocent,” Christian Rainer said in a comment to the weekly magazine. Profile.

Austria, one of the EU countries, spends the least on defense, accounting for only 0.7% of GDP The government has already announced that it wants to reach 1%, as in neighboring Switzerland, which is more than three times the number of soldiers, fighter jets or tanks, and is debating its neutrality over the war in Ukraine. But Carl Nehmmer, the head of the Austrian government, a career soldier, currently refuses to open the debate and promises. “Austria will play a neutral role”. As for joining NATO, four out of five Austrians are againstAccording to a recent survey.

Sweden considers itself non-aligned in peacetime Wants neutrality in times of war. In 1992, at the end of the Cold War, it abandoned its strict neutral policy and three years later, In 1995, it entered the European Union.

Sweden is one of the few countries in Europe that has not been at war for more than two centuries. Although it has been a member of the military coalition since the 1990s, it is not a member of NATO.. It was more than 1% in the early 2010s, after drastic cuts in military spending to nearly 4% of GDP in the 1960s and 1970s. A phase of massive investment began in 2014 after Russia annexed Crimea.

Now, after the invasion of Ukraine, Sweden wants to reach 2% of GDP soonProbably by 2030. For the first time, Most Swedes are in favor of joining NATO. But the Social Democrat Prime Minister Magdalena Anderson closed the door to that possibility, considering the situation in Northern Europe “inconsistent”.

The Ukrainian Constitution guarantees NATO membership. Zhelensky and his collaborators have completely abandoned expectations of the country joining the Atlantic Military Alliance.Chance to see Russia as a provocation.

“There is no effective European defense system now. With the onset of a serious war in Europe, NATO quickly retreated.”Bodoliac said Financial Times.

“We propose ‘Ukrainian model “Security guarantees’, and any further re-occupation of Ukraine’s territorial integrity in the conflict on the part of Ukraine, signify its immediate and legally verified participation,” he added.

Botolia also promised Ukraine, as part of any agreement, “certainly has its own army”. He also underestimated the ban on foreign sites in the country, saying it was already excluded by national law.

Two of the sources they spoke of The Financial Times They said so anonymously The possible agreement also includes provisions to protect the rights of the Russian language in UkraineAlthough Ukrainian is the only official language, it is widely spoken.

Russia’s demand is that Ukraine recognize the annexation of Crimea in 2014 and the independence of the two separated countries. On the eastern border of the Donbass. kyiv has so far refused, but is ready to separate the issue, Podolyak said.

“Controversial and conflicting territories [están] In a separate case. We have been talking about a firm withdrawal from the occupied territories since the beginning of the military operation on February 24, “he added.