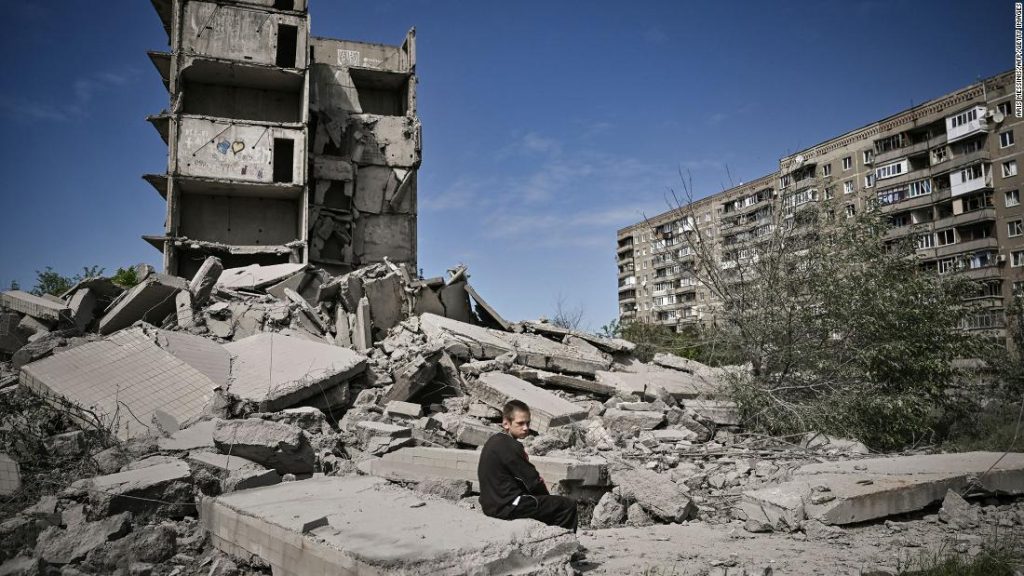 Severodonetsk was one of Ukraine’s last major strongholds in the region. Serhiy Heidi, the top military commander in eastern Ukraine, said the army had taken the decision to evacuate “because the death toll in non-fortified areas may increase every day”.

It is not clear whether Ukrainian forces are currently leaving the city, or if they have already been evacuated.

Although the capture is a symbolic breakthrough for Russia, it comes after a long and costly battle in which Moscow’s forces were met with stubborn Ukrainian resistance.

Russian forces diverted much of their firepower towards overrunning the city, and simply destroyed every defensive position the Ukrainians had adopted. This strategy was implemented slowly, as the Russians made hard and slow gains around Severodonetsk throughout the spring and early summer.

The Ukrainian forces were pushed, little by little, into a few square blocks around the Azot chemical plant, where about 500 civilians, including dozens of children, took refuge in a scene reminiscent of the siege of the Azovstal steel plant in Mariupol.

But with the army evacuating the city, the fate of those inside the nitrogen plant remains unclear.

Heidi, the head of the Luhansk Regional Military Administration, has repeatedly accused Moscow of scorched-earth tactics, razing cities to the ground with little regard for the victims while trying to capture them.

“All the city’s infrastructure was completely destroyed,” he said of Severodonetsk. Friday.

The battle now moves across the Siverskyi Donets to Lysychansk, the last city in Luhansk under the control of Ukrainian forces. There are already signs that The Russians will use the same ruthless aerial bombardment tactic to destroy Ukrainian forces, deploy combat aircraft, multiple launch missile systems and even short-range ballistic missiles.

Ukraine’s control of Lyschansk has become more fragile in recent days. Russian troops advanced into several villages south of the city, but not without incurring losses from Ukrainian artillery fire. The Ukrainian military claims that some groups of Russian tactical battalions are being consolidated or withdrawn to restore their combat capabilities.

See also  Russia's Putin is in poor health, Americans may be liberated

The Institute for the Study of War, a US think tank that closely follows the campaign, said that the Russian penetration from the south meant that they “may be able to threaten Lyschansk in the coming days while avoiding a difficult intercept crossing of the Seversky Donets River.”

Victory for Putin, but at what cost?

Luhansk and neighboring Donetsk together make up the Donbass region of Ukraine, Artificial heart It is dotted with factories and coalfields that have been home to intermittent fighting since 2014, when Russian-backed separatists seized two regions – the self-proclaimed Donetsk People’s Republic and the Luhansk People’s Republic.
The Kremlin has quietly supported troops there since 2014, and even began granting passports to residents in 2018, with more than half a million distributed by mid-2021, According to Russian state media.
Shortly before the invasion of Ukraine in februaryRussian President Vladimir Putin has recognized the breakaway territories as independent states, and has ordered the deployment of Russian troops there in defiance of international law.

The capture of Severodonetsk gives Putin an important propaganda victory in a war that has hitherto been marked by military setbacks for Moscow. The main objective of Russia’s so-called “special military operation” – the Kremlin’s official euphemism for the invasion of Ukraine – was to gain control of Donbass.

Experts predicted a quick battle in the region, unlike the battles around Kyiv in the early days of the war, which Russia lost. The fighting near the Ukrainian capital was mostly urban warfare, which allowed the Ukrainian military to thwart Russia’s advantages in manpower and equipment by keeping battles in tighter corridors, where a highly motivated Ukrainian combat force could benefit from its better knowledge of the local environment.

However, Donbass is an area of ​​plains and open spaces. The battles there involved long-range weapons, a type of warfare that favored Russia, its superior power, and its larger armed forces.

After little success in the first month of the conflict, Russian forces retreated from all over Kyiv, regrouped and focused on eastern Ukraine. The new Kremlin offensive to take control of the Donbass region has begun April 18According to Ukrainian President Volodymyr Zelensky. Russia’s progress was, at first, “Slow and erratic,” US officials said, as its military seemed to be still learning from its mistakes in the early days of the invasion.
The tide is starting to turn in the middle of mayAnd the When Mariupol, a strategically important port city, finally fell completely into the hands of the next Russian forces An intense bombing campaign that lasted three months who – which Ukrainian officials say It left up to 22,000 people dead. The fighting there was remarkably similar to the Battle of Severdontsk, both in terms of Russia’s tactical decisions and with Ukrainian fighters and civilians holed up in pre-war structures used for heavy industry.
then Russian The intensity of their bombardment increased In other parts of the Donbass region, Zelensky’s strategy It’s like genocide.

Some experts have questioned whether Russia’s efforts to seize Severodonetsk are strategically worth it.

“Ukrainian forces have succeeded for weeks in withdrawing large amounts of Russian personnel, weapons, and equipment into the area, potentially weakening the overall capabilities of the Russian forces while preventing Russian forces from concentrating on more advantageous axes of advance.”

If the Russian forces captured Lyschansk, and with it the Luhansk region, it is likely that they would concentrate more forces on Donetsk, where the progress was much slower.

The Regional Military Administration of Ukraine says about 45% of Donetsk is under the control of Ukrainian forces, including the cities of Sloviansk and Kramatorsk.

It is unclear whether the losses incurred by Russian forces in recent weeks will weaken their ability and desire to storm more territory, but the Kremlin has not deviated from its ultimate goal of capturing these two cities.

Likewise, it remains to be seen whether the punishment inflicted on the Ukrainian units provided them with sufficient resources to launch counterattacks against the Russians.

“No matter how professional our military is, Ukraine will not be able to win this war without the help of our Western partners,” Maliar said.

Ukrainian leaders will now have to decide whether it is strategically feasible to continue defending Lyschansk, as Kyiv could give up the city and divert resources for a more coherent defense of Sloviansk, Kramatorsk, and Kostyantinivka, Donetsk’s industrial belt.

The Kremlin has not deviated from its ultimate goal of capturing both Donetsk and Luhansk. She now has almost all of the latter. But the completion of the so-called “special military operation” is likely to take several more months, resulting in a war of attrition.