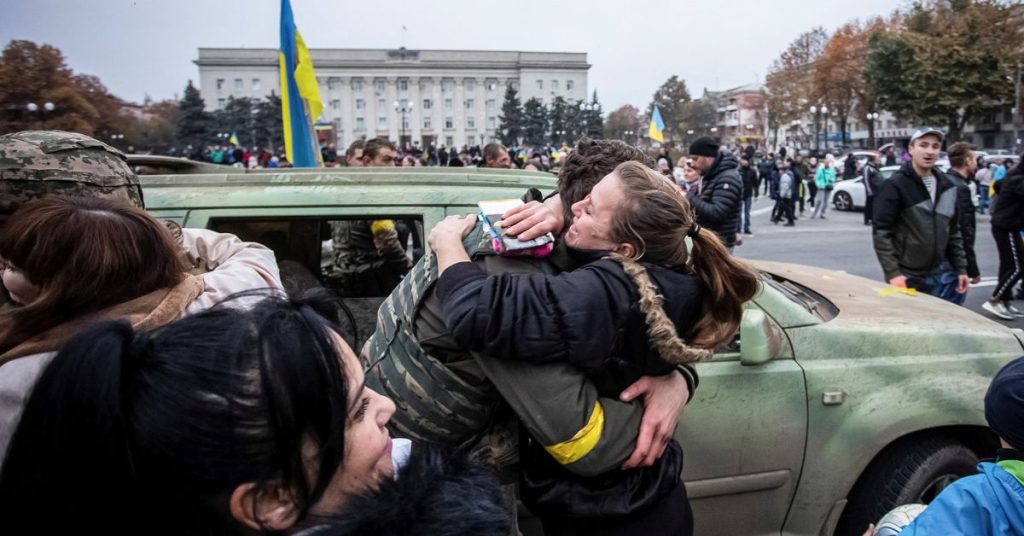 Kherson, Ukraine (Reuters) – Public utilities companies in Kherson are working to restore vital infrastructure damaged and mined by desertion from Russian forces, regional officials said on Sunday, with most homes in the southern Ukrainian city still without electricity and water.

The governor of Kherson region, Yaroslav Janusevich, said that the authorities decided to keep the curfew from 5 pm to 8 am and prevent people from leaving or entering the city as a security measure.

“We are trying to meet in a few days and (after that) we open the city,” he said, adding that he hopes mobile phone companies will resume service soon.

Ukrainian forces reached central Kherson on Friday after Russia relinquished the only regional capital it had captured since the invasion began in February. The withdrawal was the third major Russian retreat in the war and the first to involve ceding such a large occupied city in the face of a major Ukrainian counterattack that retaken parts of the east and south.

The head of Ukraine’s state railways said that train services to Kherson are expected to resume this week.

However, another regional official said that while demining was underway and authorities were working to restore vital services, in humanitarian terms, the situation in the city “remains very difficult”.

“Most of the houses have no electricity or water, and they have problems with gas supply,” Yury Sobolevsky, first deputy head of the Kherson regional council, told Ukrainian television.

While jubilant residents welcomed the arrival of Ukrainian troops in Kherson, the Ukrainian General Staff reported continuing fierce fighting along the Eastern Front in the Donetsk and Luhansk regions.

In its morning update, it said that its forces repelled, during the past 24 hours, Russian attacks on several settlements in the two regions, while Russia reported Russian artillery and missile fire on the eastern regions of Bakhmut, Avdiivka, Novopavlevka and Zaporizhia.

Zelensky attributed Ukraine’s success in Kherson and elsewhere in part to stiff resistance in the Donetsk region despite repeated Russian attacks.

“There is just hell,” he said on Saturday. “There are very fierce battles every day.”

Hundreds of residents lined the streets of Kherson on Saturday, waving national flags, chanting “Thank you, thank you” and decorating Ukrainian soldiers with blue and yellow ribbons.

“It is impossible to express in words what I feel now. Never in my life have I felt such joy as now,” said Natalia Koloba, a resident of Kherson.

“Our brothers and mother-in-law have come and we are free today. This is unbelievable.”

Earlier on Saturday, on the road to Kherson, villagers carrying flowers waited to welcome and kiss Ukrainian soldiers as they poured in to secure control of the western bank of the Dnipro River after the Russian withdrawal.

See also  Why is UK Prime Minister Boris Johnson facing his biggest crisis, and what next?

“We’ve become 20 years younger in the past two days,” Valentina Pohailova, 61, said before a Ukrainian soldier jumped out of a pickup truck and hugged her and her companion, 66-year-old Natalia Borkonok, in a small village near the city centre. Kherson.

But a barrage of artillery fire surrounded the international airport, and police said they were setting up checkpoints in and around the city and were looking for mines behind.

The road to Kherson from Mykolaiv was littered with fields disfigured by miles of deserted Russian trenches. A destroyed T72 tank lying with its turret upside down.

Waste, blankets and camouflage nets were scattered in the deserted trenches. An irrigation trench was filled with discarded Russian equipment and several anti-tank mines were seen on the side of the road.