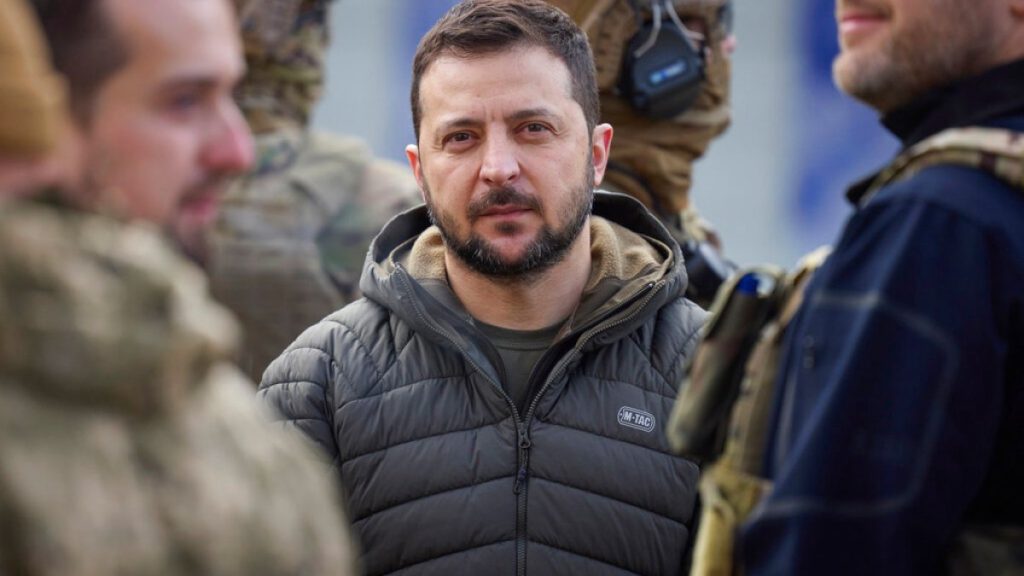 Ukrainian President Volodymyr Zelensky has stepped up diplomacy over Russia’s invasion of his country, holding talks with the leaders of the United States, Turkey and France amid protracted fighting on the eastern front of the nine-month-old war.

While Zelensky has held frequent talks with US President Joe Biden, French President Emmanuel Macron and Turkish President Recep Tayyip Erdogan since the invasion of Russian forces in late February, it is unusual for him to hold such discussions in one day.

“We are constantly working with partners,” Zelensky said in his nightly video address, adding that he expects some “significant results” in the coming week from a series of international events that will focus on the situation in Ukraine.

German Chancellor Olaf Scholz is due to hold an online meeting with G7 leaders and European Union foreign ministers on Monday to try to agree more sanctions on Russia and additional aid or arms shipments to Ukraine.

productive conversation with POTUS. I was grateful for another security package. We discussed more defense cooperation and the protection and maintenance of our energy sector. Coordinated positions eve #G7 Online summit. America’s leadership is steadfast!

Successive Russian missile and drone attacks have destroyed much of the country’s energy infrastructure, leaving millions of civilians without electricity and heat at a time when temperatures are at freezing or below.

Zelensky said he thanked Biden for the “unprecedented defense and financial” assistance provided by the United States and spoke of Ukraine’s need for effective anti-aircraft defense systems to protect its people.

He said: “We also appreciate the assistance provided by the United States to restore the energy system in Ukraine.”

He said that Ukraine would participate in the G7 meeting and that after the call, Kiev “coordinated our positions with America”.

In a statement afterward, the White House said Biden stressed that the United States was making efforts to bolster Ukraine’s air defenses as a priority.

The energy crisis was also a major part of Zelensky’s previous discussions with France’s Macron and Turkey’s Erdogan.

Zelensky described his more than an hour-long conversation with Macron as “very informative”, covering “defence, energy, economics and diplomacy”.

Meanwhile, he thanked Turkey for providing shelter to Ukrainian children and for deploying hundreds of generators in cities across the country.

The Ukrainian president also said he had discussed with Erdogan the possible expansion of a grain export pact that opened Ukrainian ports to exports in July after a six-month de facto Russian blockade.

Turkey, which played a mediating role in the peace talks in the first months of the war, worked on the side of the United Nations in this agreement.

Erdogan’s office said the Turkish leader also spoke with Russian President Vladimir Putin on Sunday and called for a swift end to the conflict.

Putin last week warned of a protracted war, and spoke of Moscow’s near complete loss of confidence in Western countries, which he said would make a final settlement over Ukraine more difficult.

Macron has championed diplomacy in the conflict, but has alarmed Kiev and some allies and the Baltic states with what they see as his mixed messages: that it is up to Kiev to decide when to negotiate with Moscow, but also that security guarantees are needed for Russia. .

EU foreign ministers will discuss a ninth package of sanctions that could add nearly 200 other individuals and entities to the EU’s sanctions list, as well as 2 billion euros ($2.11 billion) for arms deliveries to Ukraine.

There are no ongoing peace talks and no end in sight for Europe’s bloodiest conflict since World War II.

Moscow shows no signs of being willing to respect Ukraine’s sovereignty and pre-war borders, saying that the four regions it claims it annexed from Ukraine in September are part of Russia “forever”.

The government in Kiev ruled out ceding any land to Russia in return for peace.

On the ground in Ukraine, soldiers are dug in along the front line in the east amid continued bombardment and Russian attacks have left the eastern Ukrainian city of Bakhmut in ruins, Zelensky said over the weekend.

The situation remains “extremely difficult” in several frontline cities in Ukraine’s eastern Donetsk and Luhansk provinces, which together make up the industrialized regions of Donbass, where Moscow-backed separatists have been fighting Kiev since 2014.