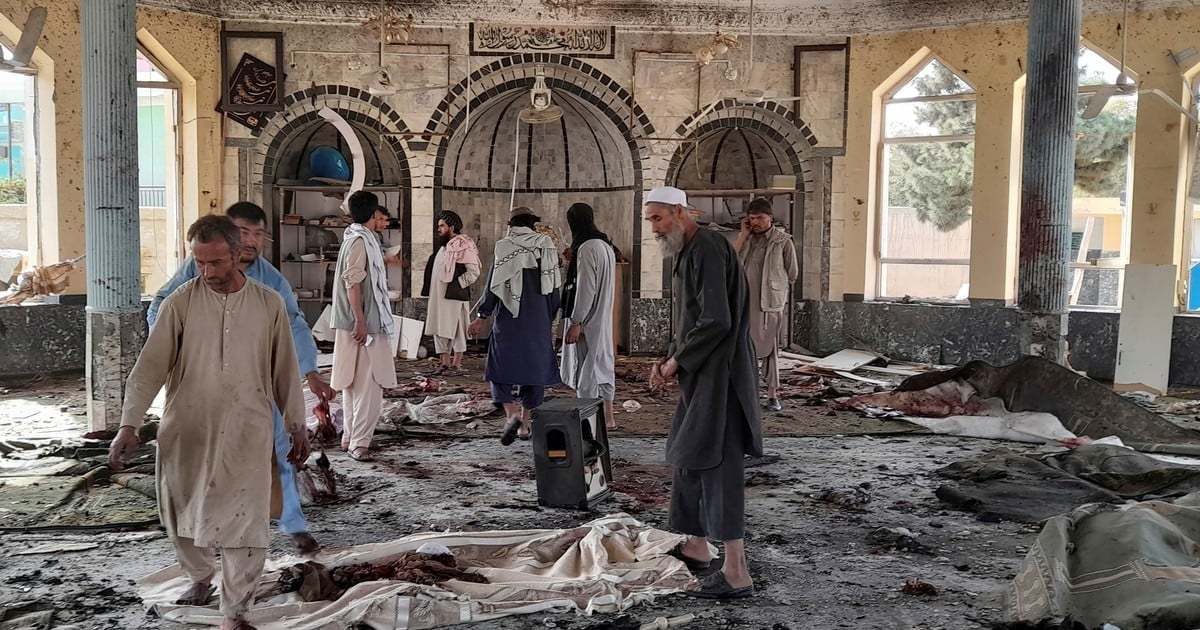 At least 80 people died More than 100 people were injured in the blast, which also occurred during a stampede Friday prayer Shia mosque in Kunduz, northeastern Afghanistan. However, the statistics vary depending on the sources and as the hours go by.

“There was a huge explosion in the mosque Syed-Abad, 80 members of the Shia community who came to pray were killed and about 100 were injured, “said Ghulam Rabbani Rabani, a former member of the Kunduz provincial council.

“So far we have received 35 bodies and more than 50 injuries,” said a doctor at Kunduz Central Hospital, who did not want to be identified. Earlier, a local official of Doctors Without Borders (MSF) said that “more than 90 wounded and 15 bodies” had come to the NGO’s clinic in the city.

The blast occurred during a traditional prayer service on Friday. AB photo.

After the blast, a Taliban spokesman confirmed the incident and predicted casualties.

Taliban spokesman Jabihullah Muhajid said: “An explosion at a mosque belonging to our Shiite sect in Bandar Khan Abad district, the capital of Kunduz province, has caused many casualties and injuries.”

The attack has not yet been claimed, but the jihadist group ISIS, a rival of the Taliban and an enemy of the Muslim Shia minority, has carried out similar acts in recent weeks.

The bomber struck shortly after noon in front of a mosque on Friday, the day of the Muslim holiday.

“I saw at least 40 bodies,” said local businessman Jalmai Aloksai, who immediately rushed to the hospital to donate blood to the victims. “The ambulance came and went Carry the corpsesHe explained.

“I called my brother when he heard the explosion, but he did not answer,” Aminullah told AFP. “I went to the mosque and saw him injured and dying. We rushed him to the MSF hospital soon,” he added.

“It was scary. Some neighbors were killed or injured. A 16-year-old neighbor died and we were only able to find half of his body, “said a teacher who lives near the mosque.

The hand of ISIS

Despite being Sunnis, ISIS and the Taliban are enemies.

In Afghanistan, the Shiites, who 20% of the population, They are often the target of attacks, in most cases carried out by a local branch of the ISIS group, The Islamic State-Corason (EI-K).

The group has been responsible for bloody attacks in Afghanistan and Pakistan in recent years. Especially suicide bombings in mosques, hospitals and other public places.

Men carry the body of one of the victims. Photo: AFP

This group targets Muslims Considering the fanatics, Like the Shias La Adnia Hazara.

In August 2019, he claimed responsibility for an attack on Shiites during a wedding in Kabul, in which 91 people were killed.

He is responsible for the May 2020 attack against him Mainly Shia sectarian motherhood Twenty-five people were killed in the Afghan capital, including 16 mothers and others Born again.

True The Taliban will come to power in mid-August It did not end the terrorist threat in the country. On the 26th of that month, more than 100 people were killed, including 13 American soldiers Attack on Kabul airport Claimed by IS-K.

See also  She went to eat at a restaurant with her daughter, but they kicked her out because of the dress she was wearing