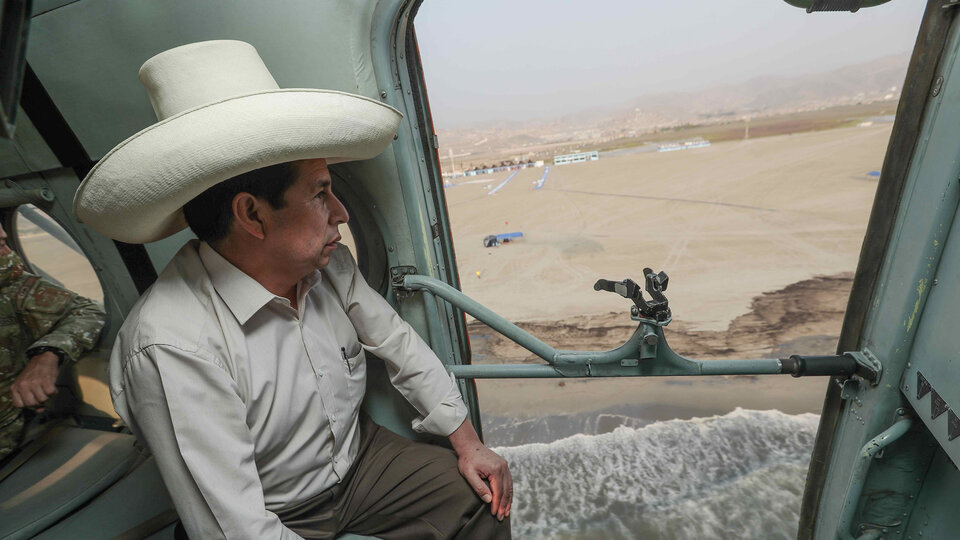 President Pedro Castillo faces first popular opposition to his government. Rising prices of fuel, customs, food and agricultural products have sparked protests in various parts of the country. Carriers and farmers’ associations began to mobilize against rising prices, which spread to other sectors of the population. Roadblocks, shoplifting and clashes between protesters and police have kept the government in check. Violence erupted over the weekend and it got worse this Monday. Four deaths have been reported, but the government has made it clear that they were not the result of police action. One child drowned when he fell into a river while fleeing a clash between protesters and police, while two others fled amid the chaos, while another fled without being able to get emergency medical help. Road blockade.

More than eight months after Castillo took office as president, the government is facing this social crisis, in the midst of popular hope for change, which has faded, and when he was weakened by the war declared by the right from day one and by internal problems such as questionable appointments, allegations of corruption and his departure from his original plan.

The Andean region of June, where the violence began, has been the cradle of the ruling Peru (PL) ruling party. President Castillo’s statement on Friday provoked public outrage by accusing opposition leaders of being paid to attack the government. “Stops and roadblocks are being announced, some leaders and some ringleaders are malicious and paying. We need to tell them we’ll be ordering in the next few hours,” Castillo’s words set fire to a social scene that was already heavily loaded. With epidemics and recent hikes, disabilities exacerbated by frustration and anger.

On Saturday, the government sent seven ministers to the June regional capital, Huanghai, to talk to the strikers. Violence spread in the city with looting and assault on public places. PL general secretary Vladimir Cerron’s house in Huancayo was stoned. Ministers and protesters met in a coliseum amid great chaos. Outside clashes continued and the smell of tear smoke permeated the Coliseum. During the tumultuous meeting, government representatives began to put Castillo’s apology over the loudspeaker in response to questions from the protest leaders in an attempt to reduce the inconvenience. “If there was a misunderstanding in some of those statements, I would have to do it a thousand times if I had to apologize to the people or apologize and make it clear,” the president apologized.

In response to recent price hikes, the government announced that it would reduce taxes on fuels, which came into effect this Monday, and eliminate the general sales tax (equivalent to Argentina VAT) on the main items in the family basket. Chicken, eggs, flour, sugar, noodles etc. The latter must be approved by Congress. It was also announced that the minimum wage would be raised from 930 to 1,025 ($ 248 to $ 273) from May. It was agreed to review the tariff concession agreements and take steps to reduce the cost of fertilizer to farmers to overcome the recent hikes. A law was signed late Saturday afternoon and it was announced that the sieges and rallies would be lifted. But not all leaders agreed, and in other cases a good portion of the fundamentals did not know what was signed by their leaders. Under those circumstances, there was no ceasefire and no sanctions were lifted. On the contrary, the social uprising worsened on Monday, with sieges, violence and looting spreading to other parts of the country.

This Monday, Panamericana Norte and Sur, and the Central Highway connecting Lima with the Andean region, the country’s three main communications routes, were blocked by protesters. The looting of shops in various cities happened again and again. In Lima, markets and shops were closed for fear of looting. Clashes broke out between protesters and police throughout the day. With violence and chaos on the streets and highways, government representatives again met with the leaders of the strikers. This time in Lima. One of the negotiators, Foreign Trade Minister Roberto Sanchez, said the government recognized and respected social demands and that they were open to continued dialogue, but warned that “sieges will not be tolerated.” The minister announced that other measures would be added to what was agreed over the weekend to meet the demands of the unions at the demonstration, but he did not announce what they would be. Negotiations continued. In the end, one of the transport unions announced that it was abandoning the struggle.

Rising fuel and food prices triggered by the war-torn crisis in Ukraine have exacerbated the precarious situation of a significant section of the population already badly affected by the epidemic. That frustration erupted into rage against the government. The right, which ignores the international scene and blames the government for rising prices, seeks to use them in its desire to destabilize the government and join the social protests of the people. It does so after failing in its call from the beginning of the government to mobilize against the government with a coup speech limited to Lima. These popular protests from the constituencies that were Castillo’s electoral base changed the scene in the streets and put the government in check as the coup could not be done by the right wing.

See also  Is betting About Skill or Luck and Random Chance?