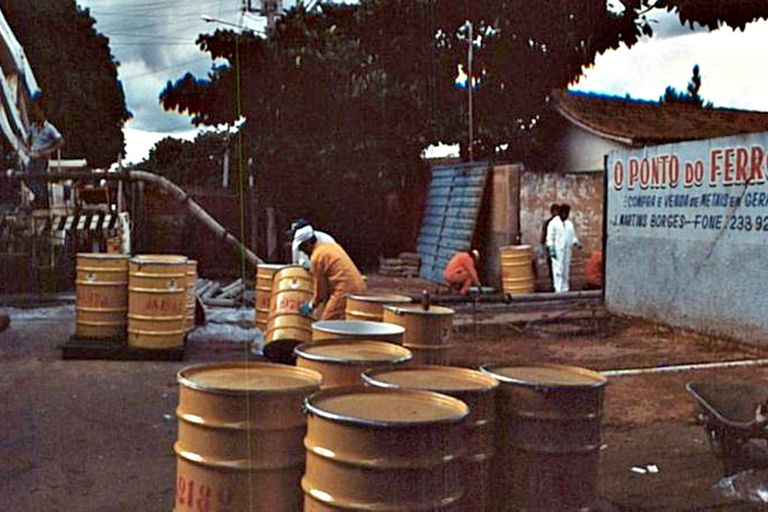 In September 1987, he told his brother, Odeson Ferreira, that some urban collectors had brought him to his landfill in Goiania, central Brazil, with a small capsule with incredible beauty inside. “He told me it was a blue powder that glows in the dark, and he even planned to make a ring for his wife.”Ferreira recalled in a conversation with LA NACION.

Curious, Ferreira went to Thevar’s business, and his brother, looking at the object, touched it lightly with both hands, but, since it was noon and daytime, it did not impress him much. “The contact lasted less than a minute, and it was brilliant, but I did not see anything in particular. In the days that followed, a week later, I usually worked as a truck driver. A large blister formed on the palm of my left hand and on the index and thumb of my right hand.”. At the same time, Ferreira one of his daughters-in-law, Lead, 6 years old, -His other brother’s daughter, Ivo- was playing with the curious dust that the trash uncle had brought to his house. The little girl even smeared it all over her body. At night her skin was attracted to the exposed light and she touched the food with her hand and ingested it. By the time Ferreira had the first signs on his hands, the lead had already begun Vomiting, bleeding and her mouth turned purple. Strange symptoms spread among relatives and neighbors.

Several weeks later he became Ferreira in September 1987 without knowing it The first victims of the world’s worst radiation accident outside a nuclear power plant. The blue powder is cesium 137, A powerful element that was one of the substances released into the atmosphere during the previous year’s catastrophe Chernobyl In Ukraine.

Out of curiosity and ignorance the dust spread among the neighbors and throughout the city. Ten days after the item Ferreira arrived home, on September 28, 1987, Gabriela Maria Ferreira, the scrap dealer’s wife and the girl’s aunt, worried about Leed’s symptoms and took the already suspicious item in a plastic bag. The bus, and a transport full of passengers, traveled 15 minutes to the hospital with their package It radiated radiation into the vehicle.

Already in hospital, Dr. Paulo Roberto Montero, the first person to suspect it was a dangerous organ, Isolated the bag in a chair And began the reconstruction of how that object became a dangerous object for the entertainment of an entire city.

The so-called Goania radioactive accident – internationally classified as Level 5, with a maximum of 7 being used for Chernobyl and Fukushima – began to take shape two years ago, with its closure. Goyano Institute of Radiology (IGR), And an unresolved legal dispute over who should be responsible for the scraping of a building where numerous radioactive devices were abandoned. Word spread quickly among urban collectors that valuable equipment was in place. On September 13, 1987, youths Roberto dos Santos Alves, 22, and Wagner Motta Pereira, 19, entered the abandoned building and disarmed one of the teams. Y They moved the cylinder weighing 120 kg by a wheelbarrow.

“Initially, they took the cylinder to Roberto’s house, 600 meters away. There they broke the device until it reached a capsule containing cesium 137. Five days later they sold some of the parts to my brother Dever, but to others, they spread the pollution throughout the city, ”Ferreira recalled.

To João Barros Magalhães, from the association exposed to contaminants, radioactive and cesium 137 (Aciec), it is “impossible to calculate the total number of victims”, the five who died (scrap dealer Dyer and his wife, his daughter-in-law) were the lead, and two technicians who worked on the radioactive waste disposal. Experts). Who died many years ago, Ferreira and two urban collectors and many years later suffered from various types of cancer. In total, there are more than 1,200 recipients of some form of subsidy for the aftermath of an accident, including those who later buried the radioactive waste and contaminated it.

“Although the effects of cesium have lasted for generations, today we have been forgotten and abandoned by the authorities,” Barros Magalhaes told LA NACION. Studies show that cesium is associated with 137, depending on the level of exposure and the purification carried out by the body. They will continue to pollute goods and people for decades to come. In fact, the dead were buried The coffins were each lined with thick layers of lead weighing over 600 kg.

This is how Ferreira chose the wonderful change of life. At age 66, he lives in the countryside, 200 kilometers from Goiania, and is dedicated to raising animals. “What happened in Goania was the result of the irresponsibility of the state government, the National Atomic Energy Agency, CNEN and the owners of the IGR Institute. But the control rules on products that are dangerous to people, They are the same today as they were in 1987. We did not learn anything. And nothing can stop such an accident from happening again, ”he concluded.

See also  She was denied a student visa to the US three times, but she doesn't feel guilty: "I cried a lot"