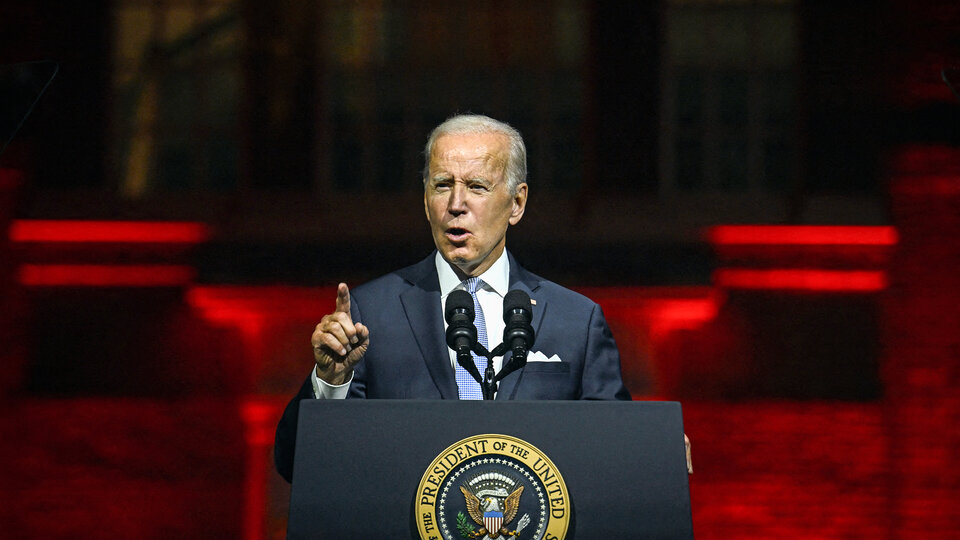 President of the United States, Joe Biden, He called on Thursday to protect democracy in the country, which he sees as threatened by the former president Donald Trump And his staunchest supporters are just two months away from midterm elections in which control of Congress is at stake. “We have long believed that American democracy is guaranteed. But it isn’t. We have to protect it, protect it, stand up,” Biden said during his prime-time address from the city of Philadelphia, considered the nation’s cradle of democracy.

“As I stand here tonight, equality and democracy are under attack”, Biden began his 25-minute speech. “We’re not doing ourselves any favors by pretending otherwise. So, tonight, I came to this place where I started talking as clearly as I could about the threats we face, the power we have. Hands on to meet these threats.” , and about the incredible future that lies ahead of us,” the president said.

“There are far more Americans of all origins and beliefs than those who subscribe to megalomaniac ideology,” the president made clear, as he dropped a resounding sentence: “You can’t be pro-insurgency and pro-American”. Biden spoke to 300 guests on a podium outside Independence Hall, the building where the Declaration of Independence was proclaimed and the U.S. Constitution was adopted more than two centuries ago.

See also  Good dog and bad dog: Science says that traits have little to do with race

“I will protect our democracy”

Biden evoked the darkness of the 2017 Charlottesville white supremacy rally that upset him so much that it forced him to run for president. “There are public figures calling for mass violence and riots in the streets”Criticized the president, insisting that “this country rejects violence as a political tool.”

“As president I will defend our democracy, and I ask all Americans to join me,” exclaimed Biden, who was accompanied by his wife, Jill Biden. The city where the president has made his biggest announcements in recent years is Philadelphia: it’s where he launched his bid for the presidency of the United States, his campaign headquarters were in the city, and it was one of the last places he held. Rally before election day.

Philadelphia is the most populous municipality in the state of Pennsylvania and is important in all elections. Biden won the state in 2020, but it went to Trump in 2016.

Compulsory He threw himself fully into the campaign for the November legislative election with a speech in Maryland last week, and another fiery rally in Pennsylvania on Tuesday. Through these and other speeches, Biden seeks to foreshadow the upcoming elections Referendum between Defenders of Democracy and Supporters of Capital Attack on January 6, 2021.

What do the polls say?

According to a survey published by the daily on Thursday Wall Street JournalIf by-elections are held today, 47 percent of voters lean Democratic and 44 percent lean Republican. In March, the right was still ahead by five percentage points.

Democrats dream of a feat in that election, which renews the entire House of Representatives and a third and is traditionally unfavorable to the party representing the White House. Polls aren’t wrong, two months is a long time in American political life.

In the last few months Inflation came downWhen Biden pushed through a series of reforms and announced Death of Al Qaeda leader In an American attack. Enough to counter two major Republican campaign axes: declining purchasing power and the fragility of the oldest president in the nation’s history.

Many polls show Democrats doing well on issues like protecting abortion rights and social improvements., in which Republicans are now often considered reactionaries. They highlight a concern for democracy and a rejection of political violence, aspects of Trump’s image that seem unchanged.

During the case at a time Secret documents found at former Republican president’s Florida home Each day has new twists, and the November election could turn into a “referendum on Trump,” the website Axios noted Thursday. Democrats will have a hard time retaining control of the lower house, but hope to retain a majority in the Senate..

Pennsylvania will be critical to making that happen. Biden already traveled to the state on Tuesday and will return there next Monday to celebrate Labor Day with Democratic Senate candidate John Fetterman. Trump will travel to Pennsylvania on Saturday to support his running mate, Mehmet Oz.