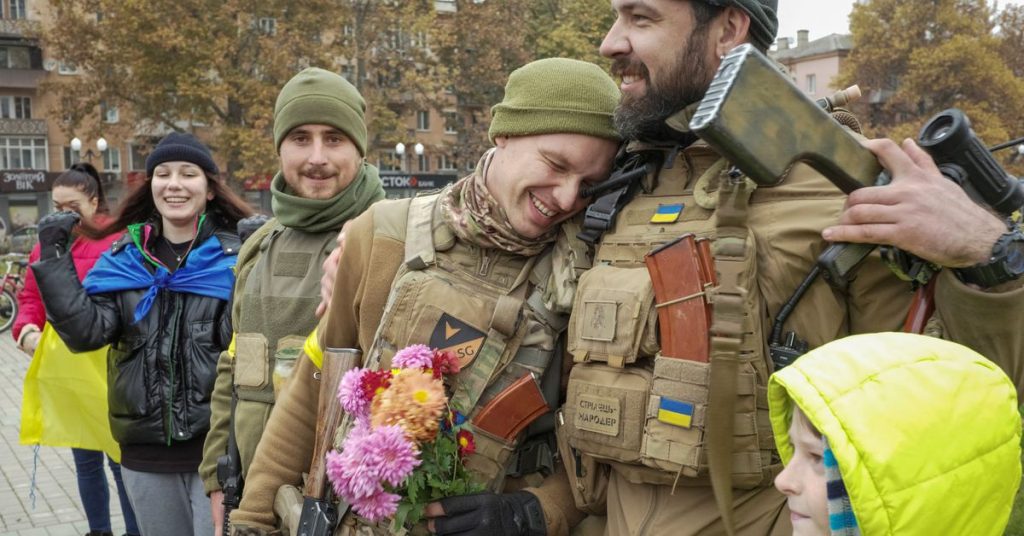 KLAPAYA, Ukraine (Reuters) – Villagers carrying flowers waited on the road to the southern city of Kherson to welcome and kiss Ukrainian soldiers on Saturday as they poured in to secure control of the right bank of the Dnipro River after the stunning killing of a Russian. to retreat.

The barrage of incoming and outgoing artillery fire continued to explode around Kherson International Airport, and police said they were setting up checkpoints in and around the city and clearing mines left by the Russians.

The mayor said the humanitarian situation was “serious” due to the lack of water, medicine and bread in the city as residents celebrated their liberation on what President Volodymyr Zelensky called Friday a “historic day”.

In the village of Klapaya, about 10 kilometers from the center of Kherson, Natalia Borkonok, 66, and Valentina Pohailova, 61, stood on the edge of a tattered path holding bouquets of freshly cut flowers, smiling, waving at passing vehicles carrying Ukrainian troops.

“We have been 20 years younger in the past two days,” Pohailova said, before a Ukrainian soldier jumps out of a pickup truck and hugs them.

Outside the village of Chornobayvka, near Kherson, a Reuters reporter saw incoming Russian fire that looked like cluster munitions that had fallen on a nearby airport. This was followed by a barrage of fire from the Ukrainian side shortly after.

Soldiers of Reuters reporters turned back near the outskirts of Kherson and said that it was too dangerous to go further.

Police said an officer was wounded while clearing mines from an administrative building in Kherson.

The road to Kherson

The road to Kherson from Mykolaiv was surrounded by fields containing miles of abandoned Russian trenches. A destroyed T72 tank lying with its turret upside down.

Waste, blankets and camouflage nets were scattered in the deserted trenches. An irrigation trench was filled with discarded Russian equipment and several anti-tank mines were seen on the side of the road.

In the village of Klapaya, Borkonok recounted that for most of the past nine months, pro-Moscow Ukrainian forces from the Russian-occupied Donetsk region had occupied the village “who said they would not harm us, that we should stay in our homes.”

But for two weeks, Russian soldiers captured Klapaya and told the villagers that they were there to look for “the Nazis, the Banderais and the American Beolabes,” adding that she replied, “If you want to look for them, look elsewhere and go home.”

The Russian forces also warned that “if we find that you are hiding any Ukrainian soldiers, we will level your house and the village.” She said the invaders also looted the homes whose residents fled.

Moscow describes its actions in Ukraine as a “special military operation.” Allegations of dangerous right-wing extremist groups in Ukraine and unsubstantiated allegations that Ukraine hosted biological weapons facilities operated by the United States were made.

Kyiv and its allies say the Russian invasion, which killed tens of thousands and displaced millions, was unjustified and illegal.

In the neighboring village of Kiselivka, a group of teenagers stood on a dusty corner with a sign made from a cabinet door on which they painted the word “Kherson” and an arrow pointing to a detour around a destroyed bridge on the main highway from Mykolaiv.

“They didn’t shoot any gunshots,” said Hiyori Kolyaka, 54, who was driving on a motorcycle. “They just went.”